This is a film about a film. Fatal Fraud is a case study about techniques used by opponents against evidence-based public policy initiatives.  In this film, Andrew Denton explains with the help of leading experts how emotional manipulation, fear, framing and omission are deployed to sow Fear, Uncertainty and Doubt in the minds of legislators and the public.

Fatal Flaws, a film made by Canadian Kevin Dunn, is a very clever piece of propaganda. While it purports to be a documentary exploring the truth, it does not show a balanced view. It fails to disclose the full story about its "experts",  what motivates them and how they are connected. It has been shown to MPs, our Australian elected representatives, in an effort to influence the debate about Voluntary Assisted Dying laws.

At Go Gentle Australia, we feel debate should be open and honest, and based on the best evidence available. Over the past years, we have collected just that: peer reviewed, carefully analysed and well-established facts that show the full picture. We have made this available in our e-books, which you can order for free from our web shop, including one titled A propaganda case study: Fatal Flaws. 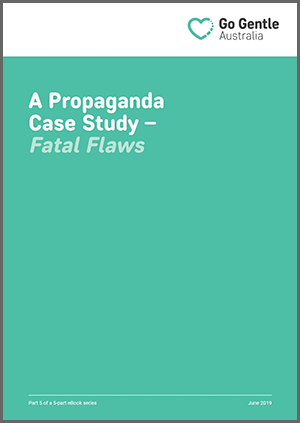 In this extended interview with Professor Ben White from the Australian Centre for Health Law Research at QUT, we explore why evidence-based policy making is so important.

If you'd like to support the work we do, please sign up below and make a donation.

Thank you for your interest in a better, evidence-based conversation about end of life choices.