Surveys show more than 80% of Australians believe terminally ill people should have a choice not to suffer at the end of life.

Evidence from Victoria, where a law has been in place for two years, shows voluntary assisted dying is safe and much-needed for a small number of dying people.

Voluntary Assisted Dying allows a dying person who is suffering in the final stages of life to ask their doctor for medication to help them die. The person must be an adult, have decision making capacity and be assessed as eligible by two independent doctors.

Yes. Every state has passed its own Voluntary Assisted Dying law. However only Victoria and WA’s laws are operating.

The Territories are currently blocked from passing Voluntary Assisted Dying laws by the federal government, which intervened to overturn the Northern Territory’s world-first euthanasia law in 1997. Find out more about how you can help restore Territory rights.

Australian assisted dying laws are some of the most restrictive in the world, intended to help a small number of terminally ill adults in extreme circumstances. To access Voluntary Assisted Dying a person must:

Advanced age, disability or mental health conditions by themselves do not make a person eligible for Voluntary Assisted Dying. To be eligible, a person must be terminally ill and satisfy all other eligibility requirements.

At the moment, a federal law blocks the Territories from passing Voluntary Assisted Dying laws - despite every state now having its own law. To change this, click here to join our campaign for Territory rights'.

The successful operation of Voluntary Assisted Dying laws relies on there being enough participating doctors. Thank you for seeking further information in this important area.

If you are a medical practitioner interested in providing Voluntary Assisted Dying services to your patients, you are required to complete an online training program and pass an eligibility assessment.

There is a strict assessment process with multiple safeguards, including sign-off from two independent doctors that the person meets all the eligibility criteria. If there are any doubts, a specialist and/or psychiatrist will give a third opinion.

If doctors suspect a person is under pressure or being coerced to request assisted dying, the process stops immediately.

A person can pause or stop their application at any time.

In extreme circumstances, applications can be accelerated. However, this should be avoided as it adds stress at an already challenging time. Starting early is best.

Assessments for Voluntary Assisted Dying are covered by Medicare, as is counselling if you want it. However, you may incur some costs if you need to travel to visit a doctor or specialist, or need more documents such as proof of residency and citizenship.

There are no guarantees a person will be able to die at home; this depends on someone’s circumstances and the services in their area. That said, people are often better able to plan ahead if they know they are going to have an assisted death. For many that will mean planning to be at home, often with loved ones present.

All Australian laws require you to have been resident in the state for at least 12 months before using their Voluntary Assisted Dying law. The only exception is Queensland, where you can apply for an exemption if you live outside the state but have ‘substantial connections’ (such as being a former resident or your family living in Queensland). Queensland’s law becomes effective on 1 January 2023.

In the first two years of Victoria’s law, 331 people had a Voluntary Assisted Death. This makes up around 0.5% of all deaths in the state in that time period. This is consistent with other countries where assisted deaths represent 0.5%–4% of all deaths.

Australia’s Voluntary Assisted Dying laws are some of the most regulated in the world. More than two years of operation in Victoria show the law is working safely and as intended. A Review Board oversees every application and publishes annual reports. Former Supreme Court Judge Justice Betty King, the Board’s inaugural Chair, said: I have been looking, believe me - I have seen no indication of any type of coercion.

There have been no reported complications and the drugs work effectively. Doctors say the most common words they hear loved ones use to describe the assisted deaths are ‘perfect’, ‘beautiful’ and ‘peaceful’. Read an account from a Victorian family whose loved one died by Voluntary Assisted Dying.

Yes, you should discuss your end-of-life options with your doctor. However, some medical professionals do not agree with voluntary assisted dying and the law grants them the right to conscientiously object. This means they do not have to agree to assess you. In this case, they are legally obliged to let you know so you can find another doctor willing to provide you with information.

Best practice in Australian healthcare is that you (the patient) are central to all decisions about your care and treatment. This is often called ‘person-centred care’. This means if your doctor will not discuss Voluntary Assisted Dying with you, you’re entitled to look for another who will.

For some people, death and dying are still taboo and difficult to talk about. But it’s important that we do, so we can plan ahead and make the right choices for us. Visit Advance Care Planning Australia for resources to help you start the conversation.

Ideally, your family will respect whatever choice you make. However, if you prefer, you can keep the conversation confidential between you and your doctor. Just like any other aspect of your healthcare and treatment, you do not have to share details if you don’t want to.

Voluntary Assisted Dying is one of several options for terminally ill people at the end of life.

Palliative care and end-of-life care are excellent in Australia. They help the vast majority of people to die without excessive pain and suffering.

However, in a small number of cases palliative care cannot relieve all suffering. Palliative Care Australia estimates this to happen to around 4% of people. For those dying people, Voluntary Assisted Dying is another option.

Speak to your doctor to find out about your end-of-life options.

Technically, euthanasia means a doctor administers the life-ending substance to a dying person - rather than the person taking it themselves.

In Australia, the term ‘Voluntary Assisted Dying’ covers both practices.

In the majority of cases in Victoria, people have taken the medication themselves. This is because in Victoria self-administration is the default method and only in cases where the person is too sick to take it themselves can a doctor step in to help. In WA, where people are permitted to choose the method of administration, a significant majority elect for their doctor to administer the medication for them.

The term Voluntary Assisted Dying is preferred in Australia because it also centres the dying person’s choice. VAD is not something that happens to you, but something you choose.

Other countries have chosen different words. For example, Canada uses the abbreviation MAiD, which stands for medical assistance in dying.

No. People seeking voluntary assisted dying are not suicidal; they don’t want to die but are dying of a terminal illness and simply want to control how and when it happens and how much they need to suffer at the end.

If you are affected by the issue of suicide or want to support someone experiencing suicidal ideation, visit Conversations Matter or Beyond Blue

Australians are overwhelmingly in favour of voluntary assisted dying. Polls from the past 20 years show public support at more than 70%. The vast majority of peak medical bodies are either supportive or neutral on Voluntary Assisted Dying, including Palliative Care Australia, Royal Australian College of GPs, Australian Nursing and Midwifery Federation, Australian and New Zealand College of Anaesthetists, Australian Psychological Society and Australian Association of Social Workers to name a few. 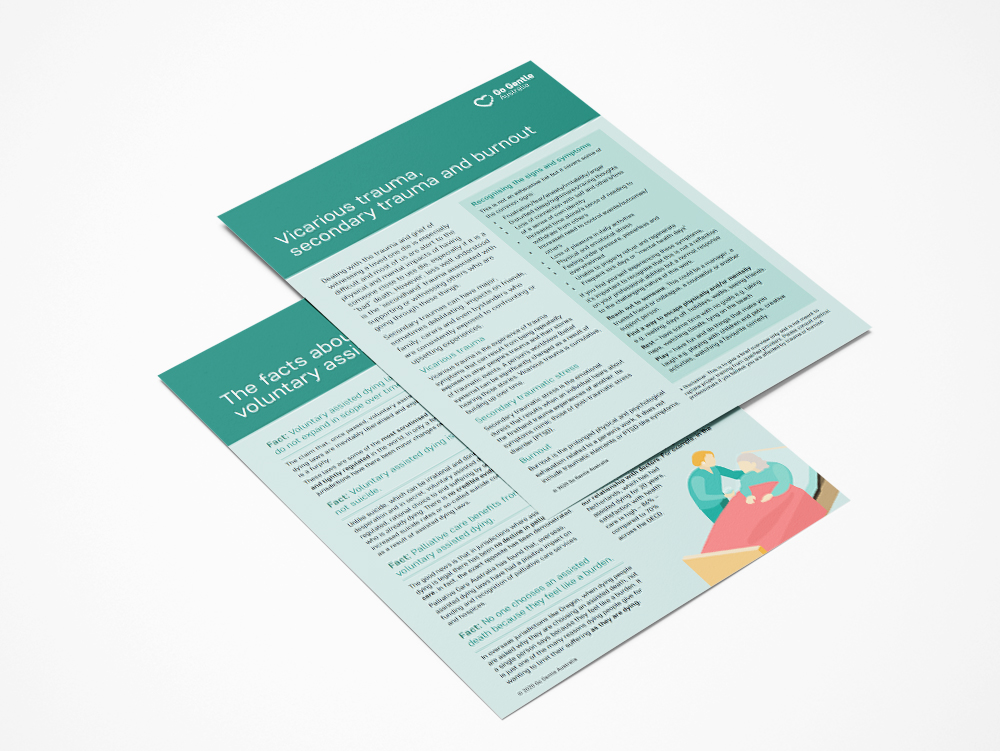