A petition signed by 7,460 Western Australians to legalise voluntary assisted dying has been tabled in parliament today. 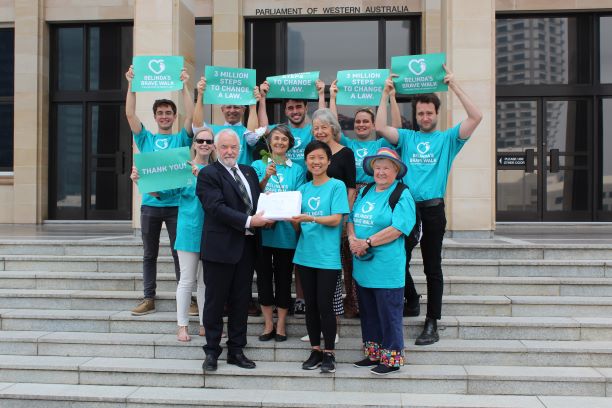 The signatures represent 7,460 Western Australians who are calling on MPs to pass voluntary assisted dying laws this year as a matter of urgency and without delay.

Perth woman Belinda Teh collected the signatures during her walk across the country this year in support of a voluntary assisted dying law in Western Australia.

Belinda, whose trek from Melbourne to Perth, Belinda's Brave Walk, was supported by Go Gentle Australia, started collecting signatures for the petition in July when she reached the WA border

The Bill is now being debated in the state’s Upper House. Progress on the debate has stalled, however supporters are hopeful a final vote will happen by the end of the year.

"Voluntary assisted dying is not a political issue, it's a human issue. I'm relentlessly positive, but it's up to our elected MPs to pass these laws by the end of the year," Belinda said.

The paper petition was tabled by Hon. Robin Scott MLC for the Mining and Pastoral region, which stretches to Kalgoorlie and beyond.

Mr Scott said he was proud to table the signatures and would support Bill when it came to the final vote.

“I have to vote according to the way the constituents in my electorate want me to vote,” he told the Kalgoorlie Miner newspaper.

Belinda thanked Mr Scott, a One Nation MP from Kalgoorlie, for his ongoing support.

“Every time I call Robin a politician, he laughs at me and says: ‘I'm not a politician, Belinda! I'm a representative of the people who elected me."

Belinda said the petition empowered many people who were otherwise disconnected from the political process. She said the collection process had sparked many conversations about choice at the end of life.

“I felt like so many people wanted to have a voice and take action, even if signing the petition was the only thing they did,” she said.

“It was really important for them to have an opportunity to share their voice.”

The petition's presentation to parliament followed last week's presentation by Belinda of $5,000 toward the purchase of a pressure care mattress for the Palliative Care Ward at Kalgoorlie Hospital.

The $5,000 represented 20 percent of the donations raised by Belinda during her walk.