Supporters of more compassionate end-of-life choices are urged to write to their Upper House MPs to ask them not to delay or sabotage the progress of the Western Australian Voluntary Assisted Dying Bill. 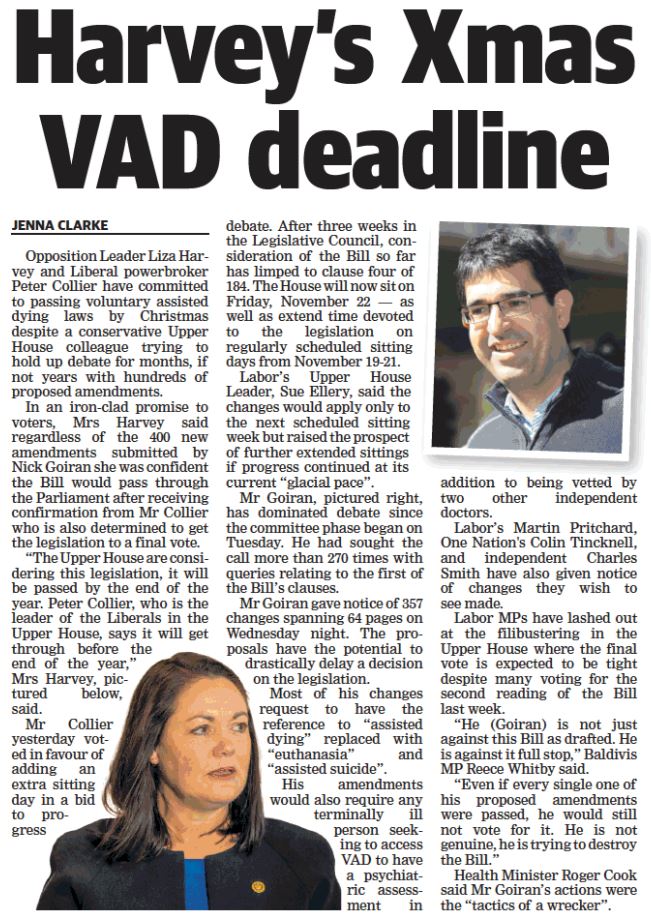 Liberal Upper House MP Nick Goiran has proposed more than 350 amendments to the Bill, an act that could delay debate and push a final vote well into next year.

“Mr Goiran has repeatedly promised not to filibuster to delay the passage of this Bill. Instead he is using other questionable methods to derail the debate and ensure no progress is made,” Ms Paul said.

“Opponents promised respectful debate in parliament. Respect includes not abusing parliamentary processes to sabotage the Bill, which is clearly what these amendments are intended to do.”

Ms Paul said Mr Goiran was being disingenuous about his reasons for seeking amendments.

“When he was asked by reporters if he would support the Bill if his amendments were passed, Mr Goiran admitted he would not.

“He is strongly opposed to assisted dying and of course he is well within his rights.

"However, the public overwhelmingly indicated its support for this Bill and he is an elected representative of the people, not of his own views.

"Putting forward 300-odd amendments to allegedly 'improve' legislation that he would never support even if all his amendments were included is just a tactic to stall progress.

“It is filibustering by another name."

While Liberal Leader Liza Harvey has given her word the Bill will be passed by Christmas, Ms Paul said every day the Bill was delayed meant more terminally ill West Australians would suffer unnecessarily.

She urged supporters to contact their political representatives and make it clear Mr Goiran’s tactics were unacceptable.

Western Australians can find their Upper House MPs and their contact details using the MP look-up tool on the Go Gentle website.

They are also encouraged to contact Leader of the Opposition Ms Liza Harvey and the Liberals' Leader in the Upper House Mr Peter Collier directly.