The roll call of people who have made voluntary assisted dying possible across Australia is long and filled with names worthy of note. But a special place is reserved for those who campaigned as they were dying. Tanya Battel sits at the very forefront of that group. 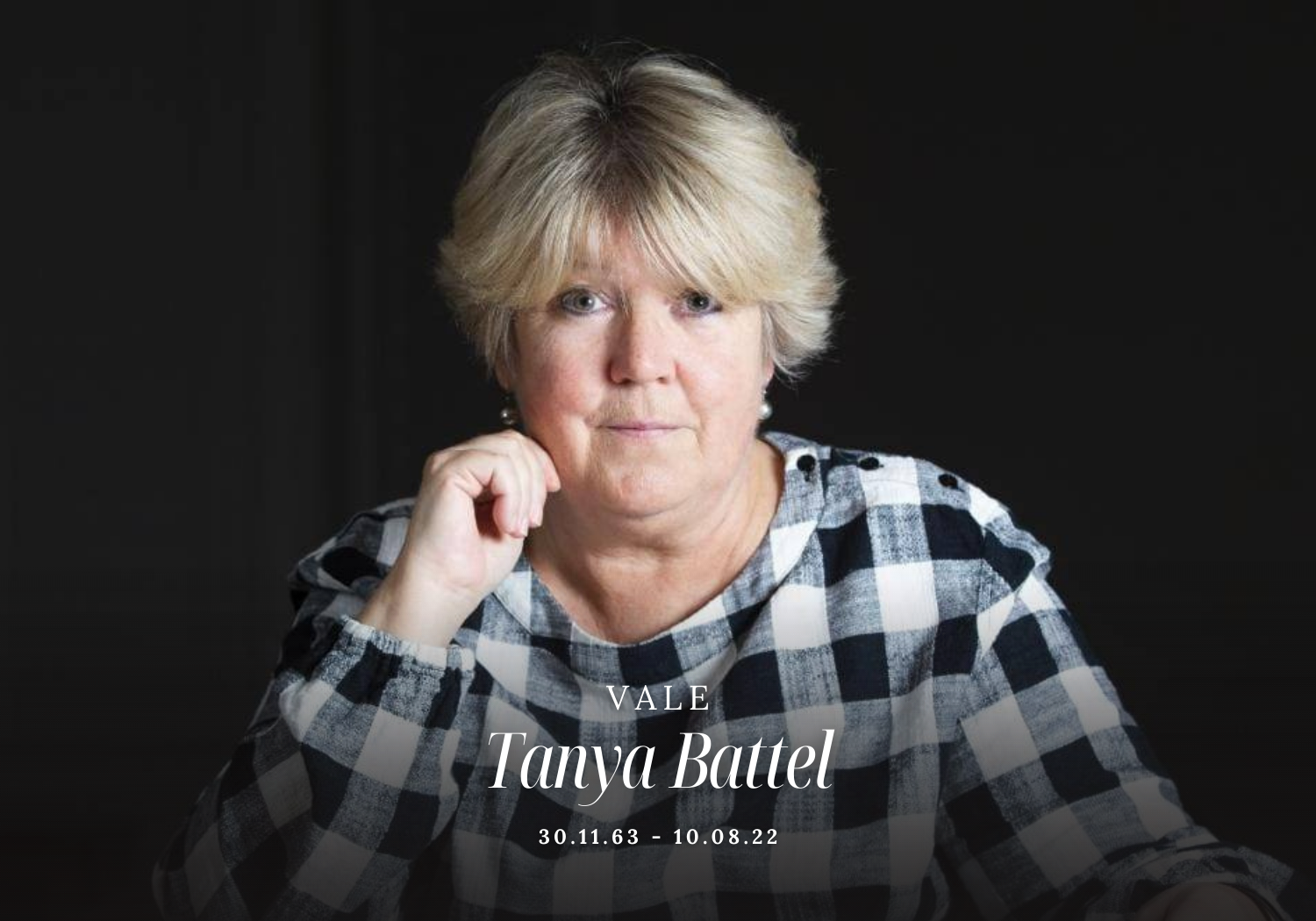 Tell me, what is it you plan to do

With your one wild and precious life?

Tanya Battel – once, rightly, dubbed a ‘superstar VAD advocate’ – ended her life, on her own terms, in Switzerland, last week.

The roll call of those who have made Voluntary Assisted Dying possible across Australia is long and filled with names worthy of note. But a special place is reserved for those who campaigned as they were dying, even when they knew that the law they were fighting for was unlikely to benefit them.

Tanya sits at the very forefront of that group.

Like so many who came to this fight, Tanya was drawn in by bitter experience. Long before her own cancer was diagnosed, she saw the same disease take both her parents apart.

She was 11 when she learnt that her mum had breast cancer. How quickly she had to grow up.

As an 11-year old, I was allowed to leave school at lunch time to come home and relieve my father of his care responsibilities so that he could go to work.

Before she died, after years of appalling suffering, her mum confessed to her that she would end her life sooner than experience her cancer journey again.

Only a decade later, her father was diagnosed with non-Hodgkin’s lymphoma. Despite all treatment, the disease took its brutal course.

He was at home, sitting in the garden in the sun. He got up from the chair and then fell over. His leg had literally snapped with the effort of getting up.

He was admitted to hospital where he spent the last two weeks of his life in agony until he died of septicaemia, a complication of his cancer: A 6’2” man reduced to a 40kg shell. Tanya was not yet 30.

Two years later, the mother of two young children, she discovered that she, too, had breast cancer.

Despite double mastectomies, in 2016, two decades after it first appeared, it was discovered that the cancer had moved from her breast to her lung. Tanya was given months to live. 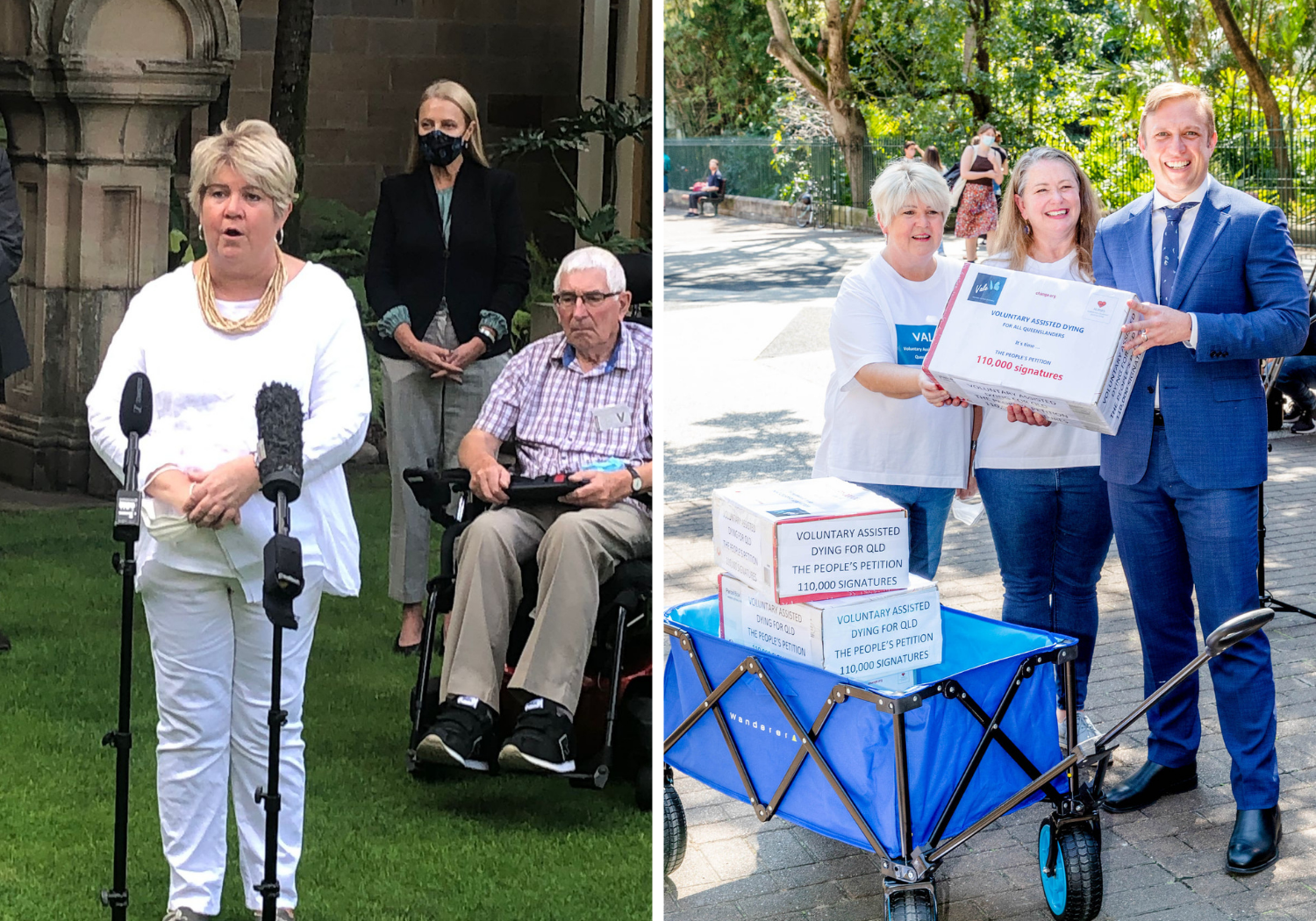 It is hardly surprising that, out of this furnace of suffering, such a formidable VAD campaigner was forged.

Tanya was fearless in her commitment to speaking truth to power. Her VALE Facebook page, and her Gang of Four, were no-nonsense and brutally honest when describing the effects of terminal cancer, the fears of impending death, and the frustration with a medical orthodoxy who wouldn’t – or couldn’t – hear the voices of people living with terminal illness

She was a doer and understood that VAD laws don't pass themselves. She didn't suffer fools (no time) – especially those who weren't prepared to step up – and she read obsessively to educate herself about the politics and history of the issue.

Her continual letter writing, meetings, appearances at parliamentary inquiries, forums, rallies, and in the media, as well as her petition to the Qld Parliament with over 110,000 signatures, had a significant impact on the campaign to make VAD law in Queensland. 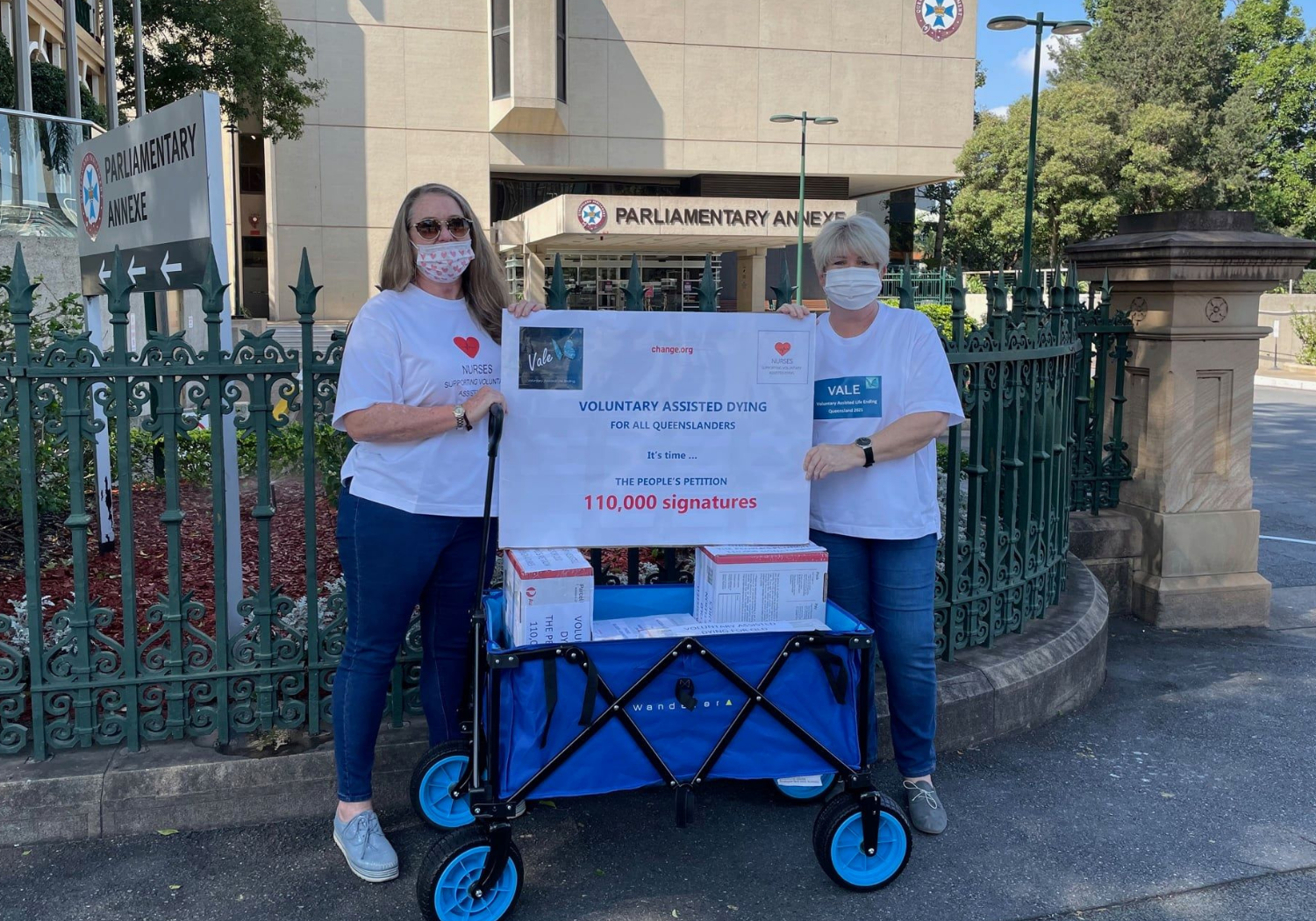 Her appearance, with the late John Ancliffe, at parliament house at the commencement of the debate, was felt to the very core by those who witnessed it. Little wonder that she was thanked by many MPs in their speeches.

Tanya spoke with the deepest authority, not just about the need for VAD, but about what it was to be terminally ill. In 2020, she took part in Go Gentle’s Dying to Know Day webinar, entitled Living A Full Life While Planning for Death. It’s worth re-visiting, but here is just a sample:

Take each day as it comes. Don't over-commit. My life was 20,000 miles an hour and I like not doing that anymore. I get pleasure in my garden. I like to spend my time with special people - people who make me laugh. People who will pick you up.

I have days where I just think I don't want to see anybody today. And it's okay to say, today is not a good day.

I threw myself into activism for voluntary assisted dying, not just in Australia but overseas and that enables me to channel the energy that I had working in business. But then I have days where I go, you know, not today. Today is the garden, reading a book and having a coffee with someone.

It’s the simple things in life, it really is.

It says everything about Tanya that her final journey was with close friends and surrounded by love. Go Gentle's Kiki Paul, who was in Europe at the time, travelled to Switzerland to farewell her. This is her recollection of the Tanya she knew:

Over the past few years I had come to know her as a fierce force for VAD. She relentlessly called out nonsense, and fought for a better understanding of why terminally ill people would want this choice. Never short of words, Tanya was always keen to explain to anyone who cared to listen. She was sharp, had a dark sense of humour and never shy to share her opinion. At length. 'Tell me to stop talking if I talk too much'.

I met with her days before her death and we had a chance to talk for a few hours. She had had cancer for more than 20 years. What originally started as breast cancer, had now metastasized into her omentum (the 'muffin top' that sits around the intestines). This put her at real risk of a bowel obstruction and she full well knew what kind of death that would be: one she definitely did not want. Knowing that she would likely not make it to January when the QLD law would come into effect, she chose to go to Switzerland. Meticulously organised, all affairs in order, all goodbyes said.

Her Facebook page name VALE was an acronym for Voluntary Assisted Life Ending but of course it also is the final salute.

I certainly hope I will see her on the flip-side, which were the words with which we left each other, followed by lots of love-yous and a seemingly never-ending hug that was just way too short.

Her last WhatsApp message to me was a beating heart – and it still beats.

I will miss her dearly.

Over recent days, tributes to Tanya have flowed from around Australia, and as far afield as the UK and Ireland. A week after her death, Queensland Deputy Premier, Steven Miles, said this in Parliament:

I would like to take a moment to honour Tanya Battel. Tragically, our laws could not be fully implemented in time for her … but she changed the world for others like her in Queensland. We owe her a debt of gratitude for her work.

Tanya also said this to us:

I feel so privileged and blessed to have been able to work with GGA, to have the opportunity to meet up with you and to have continued on with a wonderful friendship with lots of black humour.

She asked that we post the photo of Andrew’s visit to her home. You can see it below, as she left it on the noticeboard at Dignitas, with her message.

Tanya Battel. Was ever a woman so aptly named? Battle ready. Battle hardened. We feel the privilege was ours.

Mary Oliver got her perfectly:

Tell me, what else should I have done?

Doesn't everything die at last, and too soon?

Tell me, what is it you plan to do

With your one wild and precious life? 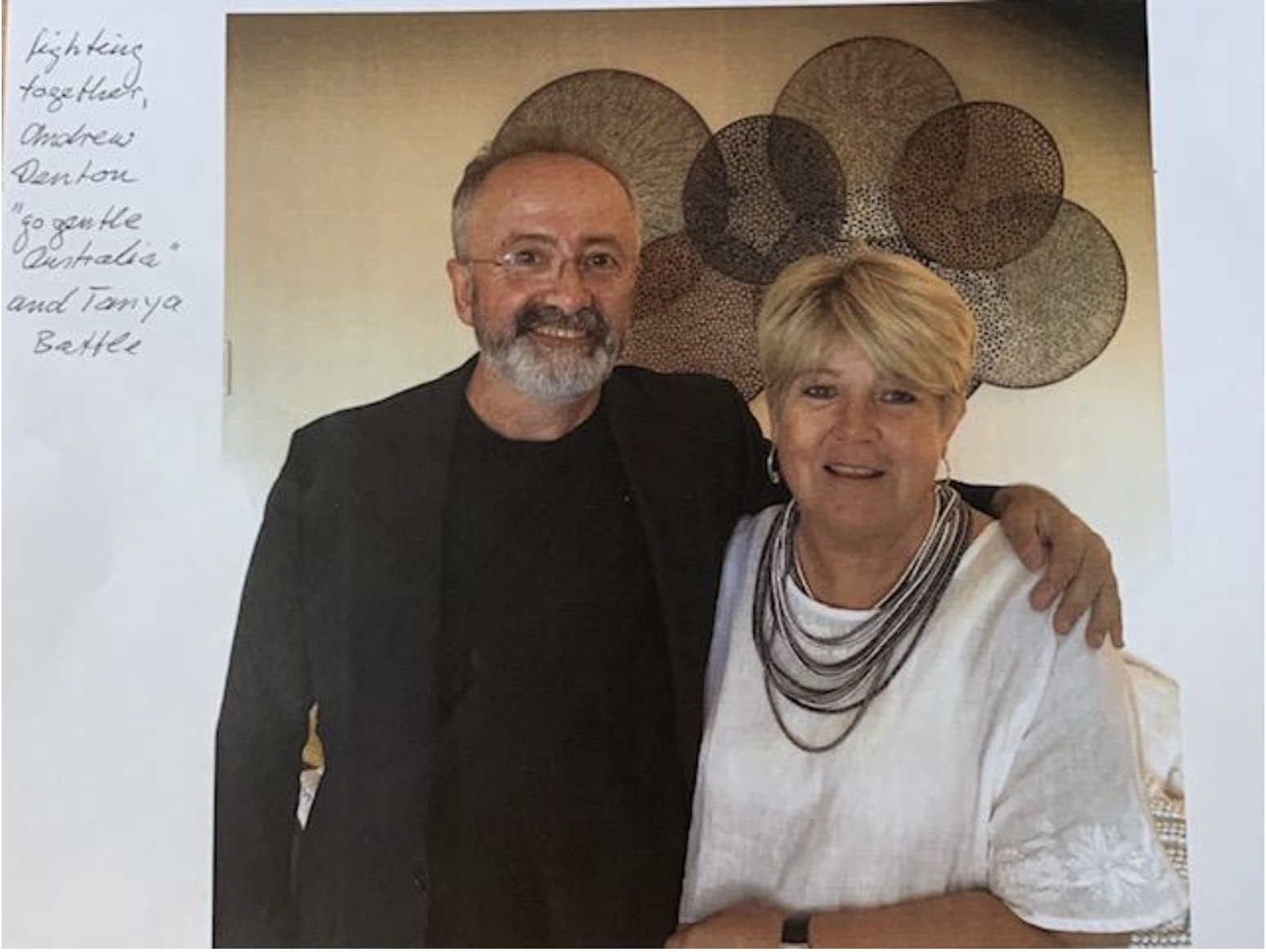