124 terminally ill Victorians ended their lives through voluntary assisted dying in the 12 months since the state's landmark law came into effect, an official report has found. 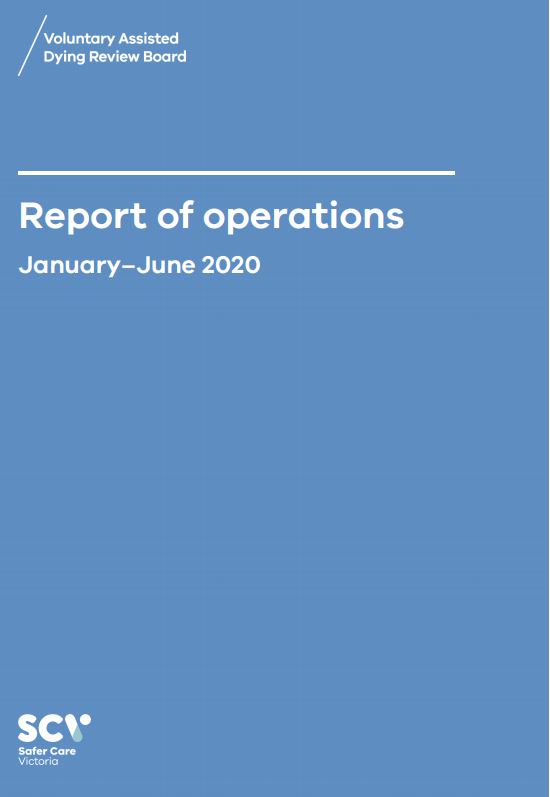 The figure is contained in the Voluntary Assisted Dying Review Board's Report of Operations January-June 2020.

“It is clear from the report that, in its first year, the law is operating safely and effectively and is providing a welcome choice to terminally ill people at the end of life,” said Go Gentle Australia’s CEO, Kiki Paul.

“The Review Board’s conclusions reflect our own research. Since the scheme’s one-year anniversary, we have been interviewing families, medical professionals, and others involved in the VAD pathway, to get a deeper understanding of how the law is working.

“Universally, the families we spoke with are grateful that their loved ones had the option not to suffer further at the end of life. All of them spoke to the humane, yet rigorous, application of the law from everyone involved: doctors, nurses, pharmacists, medical institutions, and the VAD care navigators.”

The Review Board says that since 19 June 2019 (when the Act commenced) 348 people were assessed for eligibility to access voluntary assisted dying. Of the 231 VAD permits issued in the first year, 124 people died from the prescribed medication.

“That is 124 terminally ill Victorians who were given the choice of a peaceful death free from unnecessary suffering,” Ms Paul said.

The Board noted a 50% increase in the number of eligible applications over the second half of the year. Four in five applicants who went on to take the medication had end-stage cancer, and their median age was 71 years.

“The steady demand to access the law confirms what we already knew – there is desperate need in the community for a small group of people who want a more compassionate end-of-life choice,” Ms Paul said.

“124 people represents only 0.29% of all deaths in Victoria over the year – a tiny proportion.

"This is consistent with the small numbers of people who use similar laws in places like Oregon. Opponents’ alarmist predictions that this law would cause a ‘tsunami of death’ have just not happened.”

The Board’s canvassing of ways to improve access for eligible Victorians, including a call to amend a Commonwealth law that prohibits the use of a carriage service to discuss suicide, was an important addition, Ms Paul said.

“Like the Board, Go Gentle remains concerned about the impact the criminal code’s prohibition on discussing suicide by phone or the internet is having on people in rural and remote regions, who cannot use telehealth to complete VAD appointments and assessments.

Ms Paul said the Review Board made clear that the VAD law is operating safely. “Compliance with the Act sits at 99%. Only one application over 12 months was deemed non-compliant and the Review Board made it clear this was due to an issue in the paperwork, not eligibility. The medical practitioner involved was reported to the Australian Health Practitioner Regulation Agency (AHPRA). Compare this to the situation in Victoria prior to the VAD law where, as the Parliamentary Inquiry into End-of-Life Choices found, doctors were illegally assisting people to die but ‘without oversight or accountability’."

Ms Paul said the Review Board should be commended for including additional detail in its report.

“We were pleased to see that the report includes more demographic detail, a breakdown of the diseases that have led to requests, and more information on the range of reasons people give for seeking an assisted death,” she said.

Go Gentle Australia would like to see even more information in future reports.

“More detail on where people are choosing to die, what end of life care they are receiving, the average time between receiving the medication and using it, and for how many people the medication arrives too late – is all valuable information that would give a more complete picture of the law’s successful operation,” Ms Paul said.

Read the full report on the Safer Care Victoria website

Read more in The Age