'He asked me if I would smother him.'

Gary Lobley's partner Jeff died in 1993 from AIDS. “There was nothing left - he was just like a skeleton". Jeff's illness and shocking death had a massive impact on Gary, who for almost 30 years has been advocating for better end-of-life choices. 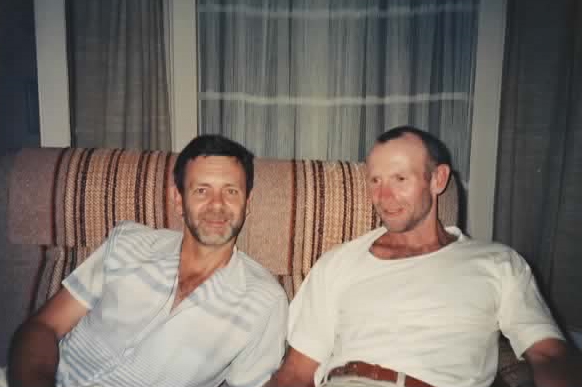 As a young man, Jeffrey Russell (pictured right with partner Gary) planned to become a Catholic priest. But as he began his studies in earnest, he grew to realise his views were at odds with many of those of the Church.

So he worked as a recovery-ward nurse at the Wesley Hospital and later became a respected “indexer”, painstakingly detailing references at the back of books and other publications.

His employers included University of Queensland Press, Penguin and Macmillan, and he also worked on the weighty documents emanating from the 1987-89 Fitzgerald inquiry into Queensland police corruption.

“He had a brilliant mind - it was unbelievable,” said Gary Lobley, Jeff’s partner of 15 years.

“He could tell you all the popes, all about the royal family, going back for years.

“As far as general things like moving a lawn or changing a pushbike tyre - absolutely useless.”

The couple rented a unit in Annerley - until jackhammering works punched through the ceiling, straight into Gary’s precious wine collection.

”Jeff was fuming, so we bought a new home, in Rocklea.”

For Gary’s 40th birthday, in October 1983 - a time when HIV/AIDS was still a ‘new’ disease - his friends threw him a surprise party.

“I had never heard of AIDS. At that time, he thought he may have had it, and he went to have a test, which a week later came back positive.

“So he sat me down and told me.

“I told him how much I loved him and that I would care for him until the day he died,” Gary said.

Jeff passed away nine-and-a-half years after his HIV diagnosis, with Gary having cared for him at home, just as he had promised.

In his final fortnight, extremely ill, Jeff begged Gary to help him end his life.

“He asked me if I would smother him. He said he’d had enough,” Gary said.

“I loved him so much. I knew he wouldn’t get better but I didn't want him to suffer either.

“I just couldn't do it. I couldn't. Even in the last fortnight when there was no communication.”

Instead, Gary sat by his side, feeling helpless.

“I’d made arrangements that if he was in pain and couldn't talk just to blink his eyes or rub his finger on my hands,” he said.

“All I did was put five drops of water in his mouth with an eyedropper and some moisture on his lips, plus sponge him down and keep him clean.”

Jeff’s illness and death had a “massive impact” on Gary, who for almost 30 years has been advocating for better end-of-life choices.

“I’m a strong believer of dying with dignity,” he said.

“If Jeffrey had have been able to have it, he wouldn't have had to suffer.

“There was nothing left of Jeff - he was just like a skeleton.

“If I were unwell, I wouldn’t want to be lying in a bed in severe pain or with tubes in my mouth or anything like that.

“The end shouldn’t be like that. Not for someone who has no hope of living.”

Footnote: Almost 30 years after Jeffrey Russell’s death, Gary Lobley still feels a debt of gratitude towards those who helped him care for his partner. As part of this story, he wished to express his thanks to “all the volunteers who helped care for Jeff, and St Luke’s Nursing Service, for their care and love towards us both”.