My sister Gay suffered the most awful, unimaginable and intolerable pain. Her death was grotesque and a reminder that as a civilised society we have to do better. 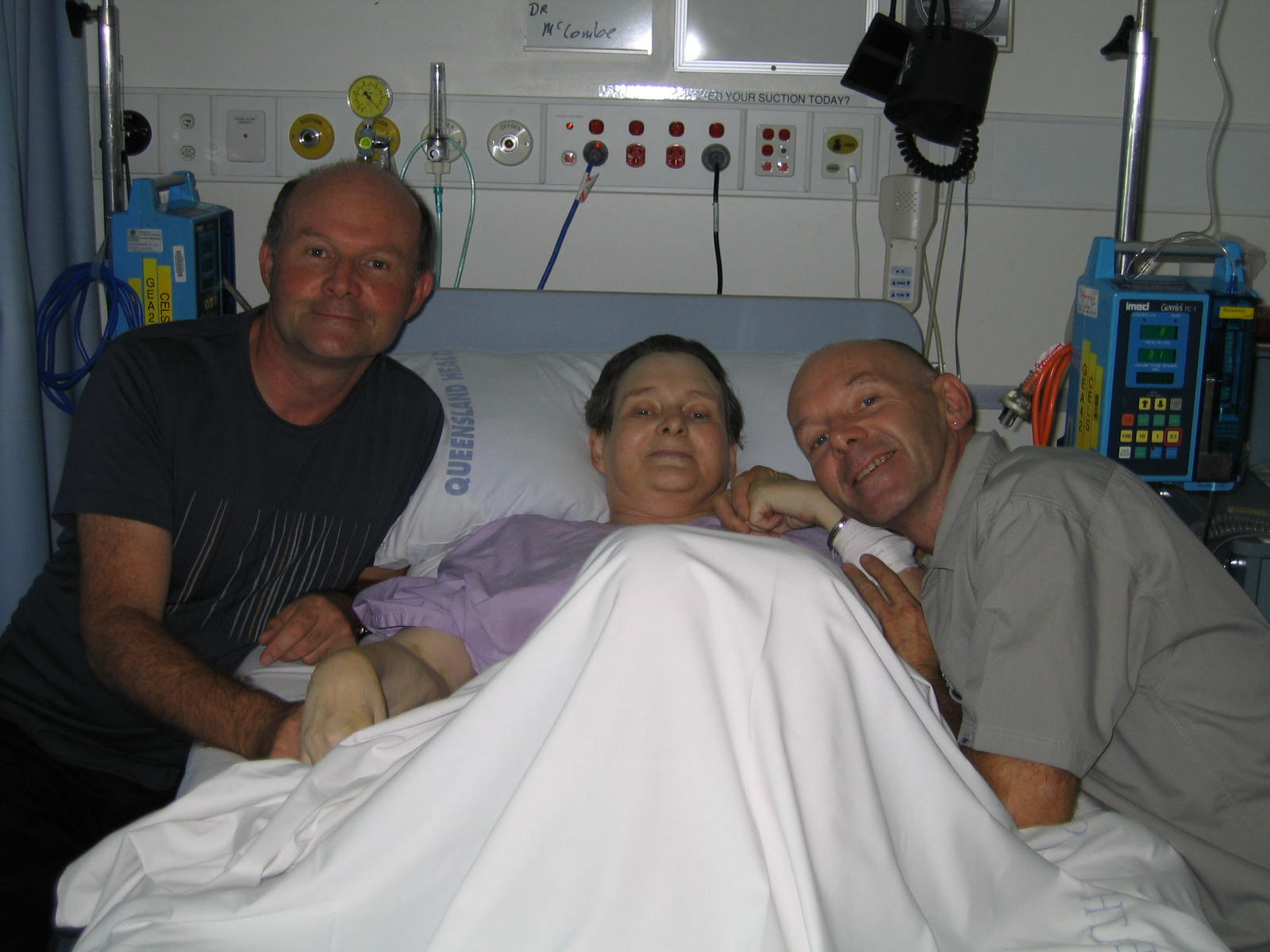 Jon Adams (pictured right with his sister Gay and brother Graham) is a former renal dialysis technician who worked across various departments at a major hospital. “I’ve seen my fair share of pain and anguish but nothing prepares you for something like this”. Here, he writes of the agonising death of his sister Gay, at 57, from spinal cancer - and how he had to break his promise to her of a peaceful death.

My sister Gay was tortured to death by her own body. And, unfortunately, she’s not the only one who has died a horrible, terrifying death.

Gay, who was loved and known by everyone as ‘Duckie’, was a loving, loyal and dedicated wife, mother and sister, and a friend to many people. She suffered from grand mal epilepsy so she was unable to live a full life as most people would. Despite this, she was incredibly community minded and, with her husband Bill, raised funds for a variety of causes. She always put other people first.

In November 2006, we went to lunch at the Caboolture RSL club. Gay was clearly in pain and said, “Can we go soon? My back is killing me.” I made her promise to see a physiotherapist that week.

I got a call three days later to say Gay had been admitted to Royal Brisbane Hospital where she was diagnosed with Stage 4 cancer, which had spread to her lungs, breasts, spine, lymphatic system, bowel and stomach. A scan revealed one of the tumours had broken the vertebrae in her neck.

The surgeon told me even the slightest movement could snap her spinal cord, leaving her paralysed. They inserted a titanium scaffold in her neck to prevent this from occurring.

She was given two to six months to live.

Faced with a terminal illness, Gay decided to decline any further treatment and we prepared an Advance Health Directive stating she wanted no further interventions, save those that would make her final days as comfortable as possible.

The cancer advanced swiftly and brutally and her condition deteriorated day by day. Within weeks she was in constant, excruciating pain. 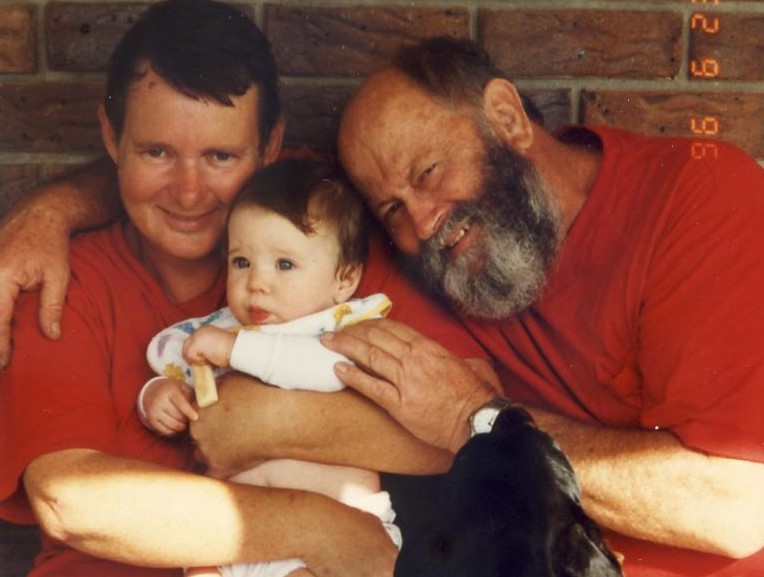 On Christmas Eve, I arranged a meeting with her medical team, which Gay attended, slumped in a wheelchair. Exhausted, she pleaded with them to allow her to die in peace. ‘I just want this to be over,’ she said. Then she asked the doctor, ‘How will I die?’ He replied gently, ‘Most likely you’ll suffocate, your breathing will slow down until it stops, but you won’t know anything and by then you’ll feel nothing at all.’

The next day, I reassured her the palliative care and pain management teams were on top of it and she would die peacefully and without pain. I promised I would be at her side.

In late January, I arrived at the hospital and from the waiting room I could hear a voice, ripped with such fear and terror, it sent shivers down my spine. Nurses were scurrying down the corridors and doctors were darting here and there. It was then I realised the screams were from my darling sister’s room.

‘Each day was more terrifying and hopeless than the one before, and in the final weeks there was nothing anyone could do but pray her suffering would end sooner than later.’

I entered to find a team of doctors draining a tumour that had ruptured in her spine. Her body was arched off the bed and her limbs were rigid - paralysed by pain. After watching her suffer like this for almost an hour, I broke down. I ran from the ward sobbing – my hands cupped over my ears, desperately trying to block out her screams of anguish. Even on the other side of the building, 80 metres away, I could hear her screams. I will never, ever forget it.

I was so traumatised I did not have the courage to venture back into the hospital for two days when I was advised Gay had been moved to palliative care. When I arrived, the ward sister said, ‘She’s more comfortable now. She missed you, she kept asking where you were.’

I could feel tears running down my face. I had failed her so miserably when she needed me the most.

I went into her room and sat beside her. She was still conscious, although heavily sedated. I moistened her parched lips with water and wiped the tears from her face and told her I loved her.

In her faint and dying voice, she uttered her last words to me. ‘Jon, you promised me it wouldn’t be like this.’ But it was. I’d let her down so badly - and so had our health system which denied Gay the right to die peacefully and with dignity.

Gay passed away on Australia Day 2007 having suffered the most awful, unimaginable and intolerable pain. Her death was grotesque and a reminder that as a civilised society we have to do better.

Gay would have been an ideal candidate for voluntary assisted dying. She was rational and clearly understood she would die within weeks. She would have had enough time to organise the various steps required for an assisted death. She was in a supportive family environment and her decision wouldn’t have been rushed or pressured.

Gay wasn’t afraid of death. Her greatest fear was dying in agony. Despite the best efforts of the palliative care team, Gay’s final weeks were filled with excruciating pain and unimaginable suffering. Each day was more terrifying and hopeless than the one before, and in the final weeks there was nothing anyone could do but watch and pray that her suffering would end sooner than later.

Sadly, Gay lived for another 42 days while the cancer ate away at her body – finally leaving nothing but the emaciated shell of the woman we all loved. After 14 years I still have nightmares where I can hear her screams echoing through the corridors. No one should ever have to experience a death like this.

Had Gay been allowed to end her life, she would have been spared the horrific death she experienced. But also those who knew and loved her wouldn’t have had to live with such traumatising memories.

‘Is this the absolute very, very best we can do for the dying?’

I implore Queensland parliamentarians who are preparing to debate a voluntary assisted dying bill, to be compassionate - and give choice and dignity to the dying and those facing unimaginable suffering.

I would invite our MPs to spend one day in a cancer ward and witness firsthand the suffering experienced by those whose pain cannot be managed. Then ask yourself one simple question, ‘Is this the absolute very, very best we can do for the dying?’