Keith English died peacefully surrounded by loved ones. He died on his own terms using Victoria's voluntary assisted dying laws and was in control until the end. 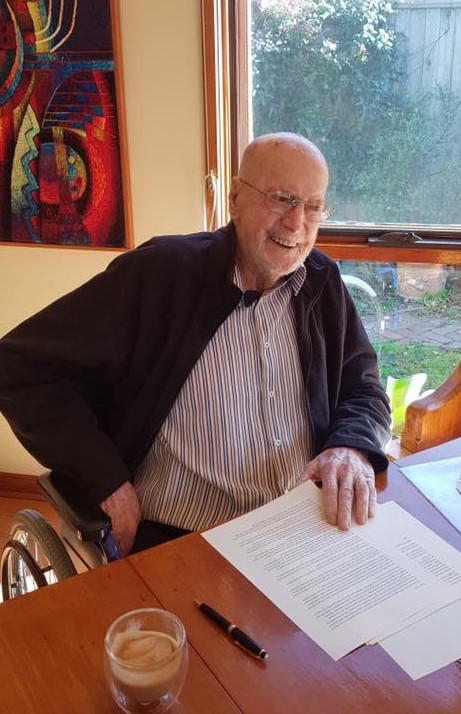 My father Keith English died at 11 am on the 17th September at 96 years of age. It was a beautiful spring day filled with a bright blue sky and the sound of birds singing.  He died peacefully and with dignity in my home. He died on his own terms and was in control of his life right up until the end.

Keith was a tall, strong man with an engaging presence and a natural interest in people, and he never missed an opportunity to learn about others. As far as Keith was concerned there was nothing better than a good discussion and he would relish the moment of introducing a conversation starter and then sitting back to listen to the divergent views that would inevitably emerge. Some of Keith’s conversation starters included: “Should women be allowed to wear the Burqa in Australia?” “Climate change is it fact of fiction?” “Julian Assange – criminal or champion of the free press?”

He was a forthright personality and never left you in any doubt as to what his view was on any given topic and he loved to hear other people’s thoughts. One of these topics over the years was voluntary euthanasia and whether it should be legalised in Australia. Keith felt very strongly that it should be an option for people to access.

In 2017 when the Voluntary Assisted Dying Act was passed by the Andrew’s government in Victoria, Dad rang me and said that he was very pleased and expressed his view that a genuine act of humanity had occurred and that people who needed and wanted to access euthanasia now could. At the time of the VAD Act being passed Keith was healthy and aging well and did not know what was ahead of him or that he would wish to access the VAD scheme.

However, Keith was diagnosed with cancer of the bowel in early 2019. Whilst he was willing to fight the good fight and underwent multiple surgeries and radiotherapy, he got to the stage where further treatment was not an option for him.

Dad had always been a passionate supporter of euthanasia and believed humans should not have to suffer a terrible death.

He was relieved when the VAD Act came into force in Victoria on 19 June 2019 as at that stage he was in the terminal stages of bowel cancer.

Keith decided to access the VAD scheme and he asked me to support him over a number of weeks as he worked through the application process to make sure that he met the various legislative requirements. It was a stressful and emotionally charged time as we learnt about the VAD system and equally the VAD system learnt about people wanting to access it. It was a learning curve for everyone involved including Keith, the extended family, doctors, nurses, pharmacists and hospital administrators.

Another reason that Dad wanted to access the VAD scheme was that he did not want to suffer what he saw as an undignified death nor did he want the people that he loved to witness him suffering. One of Dad’s core values was autonomy, and the source of his greatest distress was that his world and quality of life was rapidly diminishing. He found the loss of independence a source of great pain.

Dad was in the last days of life as the cancer grew, and he knew that his death was imminent. He was no longer interested in eating or drinking and required more assistance with personal care. Keith talked with Mum, (his wife of 67 years) as he needed to be confident that she was at peace with his decision. Mum at 88 years of age and Dad at 96 were both pragmatic and accepting that his life was coming to an end and that he should not suffer. Mum gave him the support he needed, and Keith decided on the time and date he would like to leave this world: 11am on 17 September 2019, the same day his first grandchild was born more than thirty years before. Dad saw this as the full circle of life.

Dad did not want to die in hospital, so I offered for him come to our home. He discharged himself from hospital and thanked the wonderful staff of the palliative care unit who had cared for him so beautifully over many weeks. He enjoyed a drive in his car along the bay and listened to his favourite music. We managed to get Mum out of hospital for a few hours and they enjoyed spending that time together filled with shared memories of a lifetime together. “Our last date”, as Mum described it.

In the morning, Dad read through the letters he had written to each of his loved ones – to Mum, each of his five children and nine grandchildren. We took him for a short walk in his wheelchair to feel the sunshine on his skin and fresh air on his face and we talked about normal everyday things. We then followed through the various steps required for VAD.

I am so thankful that Dad was crystal-clear about his wishes and did not vacillate. There was never a glimmer of doubt that his death would be on his own terms and that VAD was what he wanted to do. Dad was also clear about how he wanted to leave this world and that he did not want to be surrounded by people. Even though Dad loved his family, equally and deeply, the thought of having everyone present in the last 24 hours and at the time of his death was too much for him. He needed his world to be quiet and calm so that he could find the courage that he needed. Coming nearer to his final moments we played the music that he had chosen – Amazing Grace – and I lit a candle in memory of his mother and brother who had passed on before him.

The last thing I said to him was “Dad you go with so much love” and Dad replied, “And I don’t want anything else”. Then he quietly drifted away.

And so, at the end of my father’s life’s journey, I find that whilst I am incredibly sad that my beloved father has passed, I am also grateful.

I am grateful that my father Keith English died peacefully and with dignity.

I am grateful that he was able to die on his own terms and that he was in control of his life right up until the end.

I am grateful to the Andrew’s government for passing the Voluntary Assisted Dying Act that enabled my father this choice.

I am grateful to the doctors, nurses and allied health professionals who supported my father during the last few months of his life as he battled cancer and how they always treated him with dignity and respect.

I am grateful to my husband and children, to my brothers and sisters,  and friends who supported me as I tried my hardest to fulfill Dad’s wishes.

I am grateful to the VAD Care Navigators who helped me to understand the VAD system and afterwards when they listened as I shared my experience of accessing the VAD scheme.

I am grateful for a society that offers wonderful palliative care and end-of life-choices.

I am grateful for the oncologist sharing with me during that intense period of loss “Grief is love”. And I loved my Dad very much.

Read more about Keith's supported death in The Age.

Or watch The Project.