My mother Valma Wolf was fit and healthy, played sport every day, worked hard, saved her money and had just started retirement when she was diagnosed with cancer. She was given a number of months to live, but she lived longer than that and it’s fair to say she wasn’t pleased when she kept waking up every morning because she had absolutely had enough.

At first she had a lump in her groin and she’d been complaining about it for a while. They cut it out and she had radiation and chemotherapy, but in three to four months the cancer had come back and it had come back aggressively.

The doctors said Mum had six months to live, but then there was this fantastic doctor who said ‘There is this 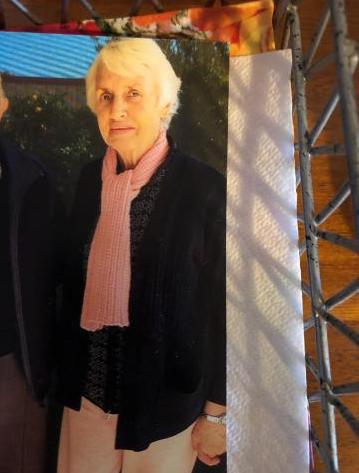 new medication out now’. She took that and the tumour started shrinking. We all thought ‘This is great, this is a miracle’ but the side effect from the medication was that it filled her lungs with fluid and it affected her heart so she had to stop taking that because she couldn’t breath. Our hopes and expectations were dashed.

Mum had a blood cancer, angiosarcoma, an aggressive form that ate away at her bones. The pain was the main issue and the indignity of it all because the cancer was in her bladder and that meant she had no control, so at a point in time she started wearing a large nappy. To see someone who was an inspiration to me go to that level was horrifying.

Although the doctors said Mum had six months, she lasted another 18 months on top of that. She wanted to spend as much time as she could at home, but when the pain got to the level where she couldn’t bear it any more she’d go into palliative care temporarily. At the end, she was in St John of God Community Hospice in Murdoch. They were fantastic. Those people who have to see people dying all the time and make them as comfortable as they can, they are the real heroes in our society.

But palliative care wasn’t enough for Mum. What happens is they reach a scenario where it doesn’t matter how many pain killers they have, you can’t block out the pain. She was saying ‘Please put me out of my misery, I’ve had enough’. Everyone in the family was emotionally scarred and she was deeply unhappy because she knew that us watching her suffer was going to have a negative effect on us and she didn’t want to go through that.

She knew she was dying, she’d tried everything to cure it…like she said ‘I just want to go’.

I wouldn’t call myself a religious person but I’d call myself a spiritual person who believes in God. I don’t see how people being able to decide what they want to do, after exhausting all avenues, could be viewed negatively.

For Mum it was two years of agony from diagnosis to her passing on football grand final day, September 29, last year. She died the day after her 70th birthday. She was always incredibly independent and wanted to make her own choice about how she went out and the terms she went out on and she didn’t go out on any of those terms.

Throughout my life I got a lot of motivation from my Mum, that’s for sure, in terms of the standards that are required and things like that. She’d come from that generation after the war, the Golden Generation, they’d come through that hard period and they were tough people. Mum came from a dairy farm and she’d always had a huge amount of independence and pride in herself and all those things that she wanted to do.

When I played footy she came to every game. She wasn’t frightened to tell me if she thought I wasn't putting my best in. It was this decline from a vibrant, intelligent person who played sport regularly to someone who was in a vegetative state that was hard to take. It’s disgraceful and the system is set up to allow that to happen. To see someone deteriorate like that and crying out in agony and being in a maximum amount of pain, was horrendous. I was in a fog for two years.

I grew up in the country. When you are in the country and on farms and things like that you see animals get injured all the time. You have to decide pretty quickly — can that animal be rehabilitated or should you do the humane thing and put it out of its misery? People pat you on the back and tell you you’ve done the right thing when you have done the humane thing, yet with the people we love and cherish we can’t assist them in being free of pain.

It’s very difficult for me to sit here and listen to the Catholic Church, for example, tell me that people can’t make their own decisions when their life ends and then you see these allegations of sexual abuse within the church. It’s ‘Hang on, please don’t pass judgement on other people, why don’t you clean up your own backyard first?’

To the members of parliament who will make the decision on changing the law, I say: ‘Hope and pray you don’t have to witness your loved ones going through what a lot of us have had to go through. Go into some of those palliative care places and visit the patients and ask them yourself.  I’m sure you will get an answer that will persuade you that people should have the right to go out on their own terms, provided all avenues have been explored.’

I wasn’t sure what my belief was, but after seeing my mother suffering greatly, I’ve moved over to the ‘yes’ side.