Tasmania's End-of-Life Choices Bill 2020 is on track to be tabled in parliament in late August ahead of its first reading in mid-September. 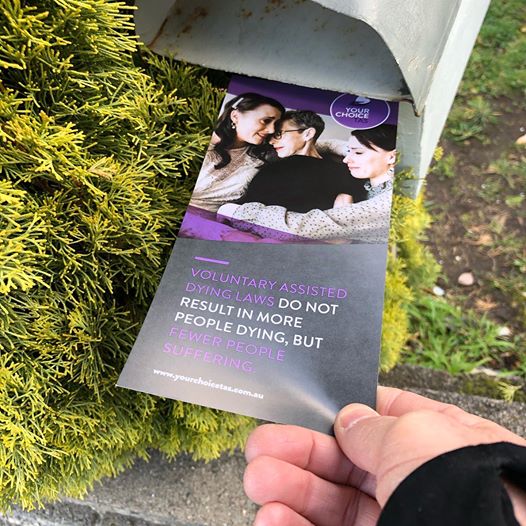 MCL Mike Gaffney says he believes the final draft of the Voluntary Assisted Dying Bill is robust and sound, and reflects the views and needs of Tasmanians.

“My office has received a huge amount of feedback from people all over Tasmania which I have used, in consultation with Office of Parliamentary Council, to strengthen and improve the Bill,” the Independent MP says.

“This final draft has evolved after extensive deliberations – I really feel that it reflects the views and needs of Tasmanians.

Gaffney has conducted over 40 forums on the End-Of-Life Choices Bill around the State. Following the COVID-19 restrictions, he switched to Zoom conferencing, which, he says, “has been very popular”.

Prior to the Bill’s introduction, he intends to table a collection of Tasmanian stories, opinions and experiences about VAD. So far, he has received more than 60. If you have story to tell, you can send it to: [email protected]

The wider campaign is also proceeding well. Your Choice Tas has completed a letterbox drop of 120,000 pamphlets to assist Tasmanians connect with the issue. A petition to parliament in favour of VAD has now reached 10,000 signatures. Find out more on their website.

In a positive move, Gaffney says Palliative Care Tasmania has advised him that any Tasmanian who intends to utilise VAD will be provided with palliative care options.

Gaffney says he accepts there is a range of perspectives and experiences regarding voluntary assisted dying and the Bill, together with its strong safeguards, accommodates all perspectives. Those who wish to choose VAD can do so, while those who are opposed need not participate. And, importantly, vulnerable groups are protected.

“It is simply about individual choice,” he says. “I am convinced that if politicians are listening to their communities, the majority of whom believe Tasmanians should have the right to choose, then the Bill will pass.”

Tuesday 25 – Special Interest speech including collection of stories and experiences