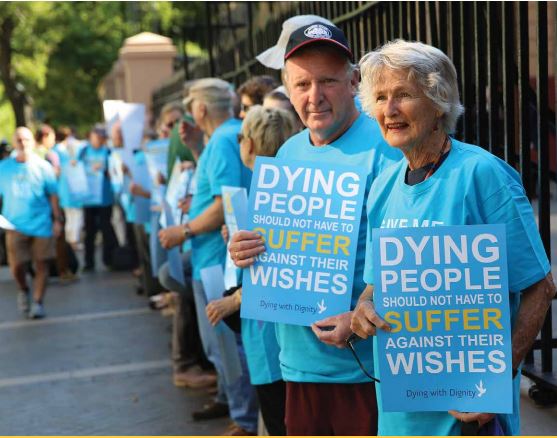 The bill, if passed by parliament, would give eligible terminally ill people in NSW the choice to pursue medical assistance to hasten their death and to avoid needless suffering at the very end of life.

Kiki Paul, Go Gentle Australia’s CEO, said the draft bill was the result of wide consultation with stakeholders and drew on the model of VAD laws passed in other states.

“This is about giving eligible terminally ill people in NSW a choice to end their suffering. It is a safe, compassionate draft law with rigorous safeguards,” Ms Paul said.

“Mr Greenwich’s bill has the right balance between the number of safeguards and ensuring eligible people face as few barriers as possible to access the law,” Ms Paul said.

“Mr Greenwich should be congratulated for balancing patient autonomy, medical best-practice and the necessary safeguards to protect against abuse.

“The bill protects an individual medical professional’s right to not be involved and it also protects those who do by providing much needed regulation around end-of-life care and practices.”

Andrew Denton, Go Gentle’s founding director, said the bill was now in the hands of NSW politicians and he urged them to reflect the wishes of their constituents. Multiple opinion polls over several decades had shown greater than 70% support for assisted dying laws.

“It’s now up to NSW MPs to consult with their communities and other stakeholders,” Mr Denton said.

“Unlike the last VAD Bill in 2017, which was defeated by a single vote in the Upper House, MPs have the advantage, this time, of being able to see how a similar law has worked safely and effectively in Victoria for the last two years.”

Ms Paul added: “We call on Premier Gladys Berejiklian to do the right thing and give the debate room in the parliamentary schedule and to allow her government MPs a conscience vote.”

“This is now an equity and fairness issue. Why should terminally ill people in NSW be denied the same compassionate end-of-life choices available to Australians in four other states?

“Terminally ill people are relying on us to get this done.

“There is a desperate need for this law, as evidenced by the thousands of testimonies from NSW residents of needless suffering at the end of life.”

Read the story in the Sydney Morning Herald.