The family of an elderly Victorian woman who chose to end her life through voluntary assisted dying has responded to the author and publishers of an article that they believe grossly misrepresented their mother’s death. 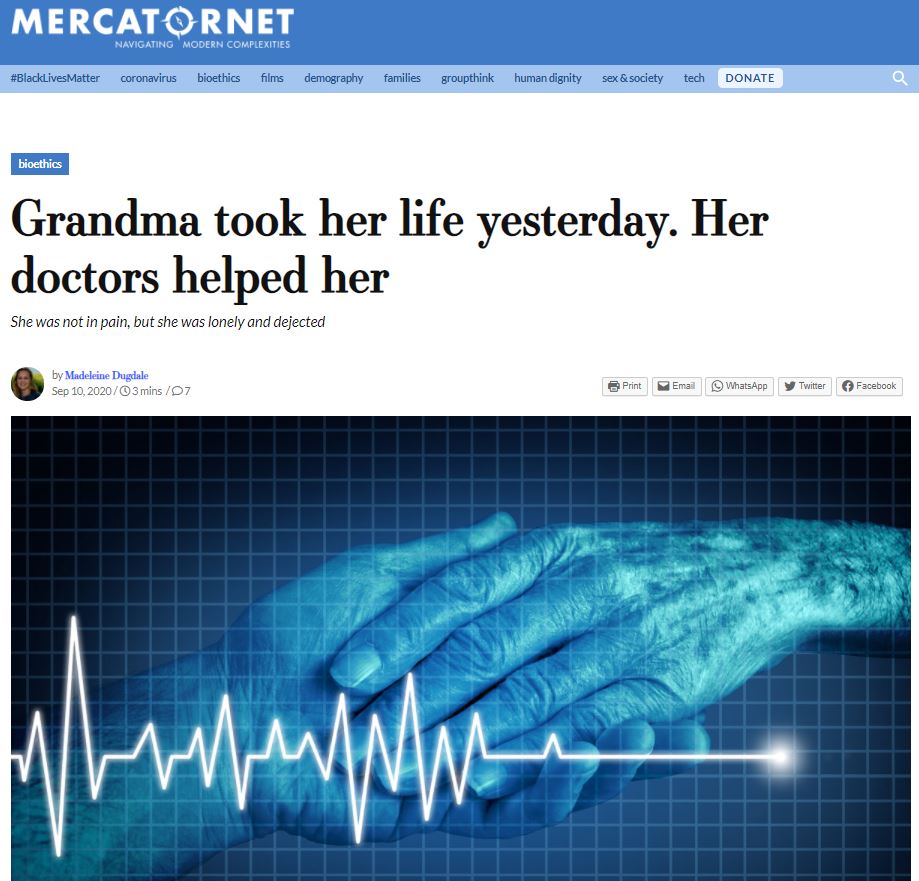 The opinion piece was published on 10 September – a day after the woman's death – on MercatorNet, a website that promotes family values with links to the Catholic Church. The author is the granddaughter-in-law of the deceased woman and was a member of ‘Catholic Voices Australia’, a group with a stated mission to “represent the Catholic Church passionately in the media”.

In her article, author Madeleine Dugdale describes her grandmother-in-law’s choice to pursue assisted dying as “an horrendous act of desperation and defeat, brought on by depression” and says the family failed to show the woman “real compassion”.

Dugdale also makes a series of assertions against the woman’s doctors, implying they had “whispered into the ears of the vulnerable that… a painful death is undignified” and that they had failed to explore other treatment options with her. If true, both would be serious contraventions of the Victorian Voluntary Assisted Dying Act.

In a written response, the family has described the accusations as “baseless”.

“Madeleine’s allegations about Mum’s reasons for pursuing VAD – her fears, care situation and doctors’ motivations – are all unfounded.

"Madeleine had not visited our mother for more than three years, so had no insight into these matters,” they write.

They say the accusations about their mother “dishonour her memory and have caused great distress to our family” and have demanded a written apology.

The author and editor of MercatorNet have been contacted for comment.

Read the family’s response in full below.

We were dismayed to read an account of our elderly mother’s death through voluntary assisted dying in Victoria published on the MercatorNet website on 10 September (and since removed).

The article was written by a distant family member, Madeleine Dugdale, who was not intimately involved in our late mother’s life or her death. In it, she made a range of baseless and hurtful allegations that grossly misrepresented our mother’s situation and her state of mind.

Madeleine insinuated that our Mum’s death was somehow wrongful – that she was lonely and depressed living in a nursing home under COVID lockdown and ended her life after being abandoned by her family. Nothing could be further from the truth. Madeleine had not visited our Mum for more than three years, so had no insight into these matters.

Our much-loved and very strong-willed Mum died at the age of 87 after a 12-year fight with multiple cancers. She made a request to her GP for VAD following a recent diagnosis of cancer of the liver, bowel and pancreas, a fact not mentioned in Madeleine’s article. Following Mum’s request, two independent doctors assessed her as eligible after confirming her terminal condition, her poor prognosis, and the significant suffering that she was enduring.

Madeleine also falsely alleged our mother’s doctors failed to explore with her all treatment options for her end of life, including palliative care. To suggest the doctors did not act properly is not true. All the care she received was marvellous. Palliative care was discussed. The reality was that Mum had watched her husband of 65 years, our Dad, die slowly in palliative care and, in her words, “did not want a bar of it”.

Madeleine also accuses us – her immediate family – of not showing our mother “real compassion”. Of all the baseless and hurtful things Madeleine wrote, this was the most difficult to read. Our Mum was deeply loved, well cared for and we miss her dearly.  Both of her children understood and supported her decision. We were with her when she died, peacefully and wrapped in our love, and that of the nursing staff who had cared for her.

Mum did not share Madeleine’s devoutly Catholic worldview and its beliefs about dying and death. She would have been profoundly unimpressed with her attempts to make political mileage out of what was a private matter between Mum, her immediate family, and her doctors.

We have asked Madeleine for a written apology. And we urge others who are opposed to voluntary assisted dying, for whatever reason, to stick to the facts when making public arguments.

This will be our only public statement and we ask that everyone respect our family’s privacy on this deeply personal issue. Any further questions can be directed to Go Gentle Australia.