My father Ernest Alun Jones was a World War II veteran, a very stoic character.  I never heard Dad complain about anything his entire life, even when he was sick and dying, until they were draining his lungs with no anaesthetic. He was crying, begging me not to let them do it. Basically he was begging me daily to help him die. But they dragged it out to the last gasp. 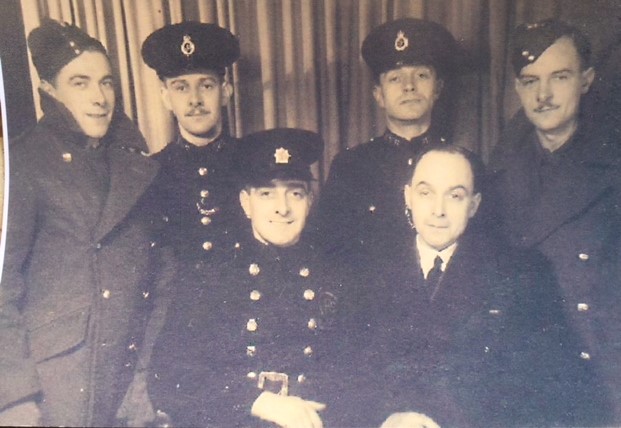 Dad was originally from Glangwyderrig Farm in Llandovery in Wales and had been enlisted into one of the battalions near there. He was a paratrooper who was evacuated from Dunkirk. Dad had four brothers in WW2  during which he lost three brothers and also his father (see photo right). In 1967 he made WA home.

In 1976, at the age of 61, he was diagnosed with lung cancer. I was 18, an only child, I lived with him. They put him in hospital and did a bronchoscopy and then gave him radiation and sent him home.

Dad owned a chain of food shops, I had gone in to do the wages. When I arrived home Dad’s skin appeared a pallid green colour, he was sweating and struggling to breathe, forcing himself to walk up and down the hallway, drowning in fluid because they had given him such a massive dose of radiation.

Immediately I took him back to Sir Charles Gairdner Hospital. Around midnight they rang to say I better come in, as they did not expect him to see the morning. He survived the night. They started draining his lungs on a regular basis. He was too weak to fight them and there was nothing I could do. I wouldn’t have had a clue at that age what my rights were, if any. It was six weeks from the time he was diagnosed to the day he died.

That was the start of my belief that people like my Dad should have the right to choose how their life should end.

I think I still have Post Traumatic Stress Disorder from that experience and feel I let him down.

Twenty one years later my best friend’s mother had bowel cancer and the treatment was equally as appalling. She had top hospital and medical cover but ended up in a four-bed ward in Royal Perth Hospital because that’s where the doctor worked. She was eventually put into palliative care at The Cottage Hospice, where she died a pretty challenging death.

Then in 2015 my mother Carole Kerr died from breast cancer. Mum lived in Terrigal in New South Wales. She was 83. She did not want a mastectomy, though she finally agreed to one. She did not want radiation treatment. She just wanted palliative care and to die a dignified death.

We had a difficult time getting her out of hospital and set up at home. Against my wishes she was moved to a locked ward at an aged care facility. My mother could not walk but was considered at risk of absconding! I had a great degree of pressure heaped on me not to remove her, but I felt it would be a greater breach of my responsibility for her welfare if I abandoned her to her fate.

I put round-the-clock care in her home at a cost of $7000 a week. That was the only way I could get her somewhere she was happy, comfortable and had good people around her.

But even with the best palliative care she was still distressed.

That’s what is common in all three cases. My father was beside himself with what painful procedures they were going to put him through − and he wasn’t a coward. My friend’s Mum had a morphine pump when she was in palliative care. I sat with her the night before she died. Every time the pump went off she would say to me ‘Someone’s trying to kill me, I can’t breath’. Mum’s stress levels for the last few weeks were very high. She was anxious, fearful and in pain.

Dad would have chosen assisted dying and so would Mum. I couldn’t say with my friend’s Mum, but I think she would have appreciated the option. Having the option is sometimes as important as going through with it. The fact that you have the ability, it’s in your control, there is this drug that you can take and just go to sleep and not wake up. You have that choice of ‘Can I stand this anymore, or not?’