Go Gentle Australia has been made aware of a grossly misleading advertisement circulating on social media and published by the Catholic Archdiocese in Sydney. 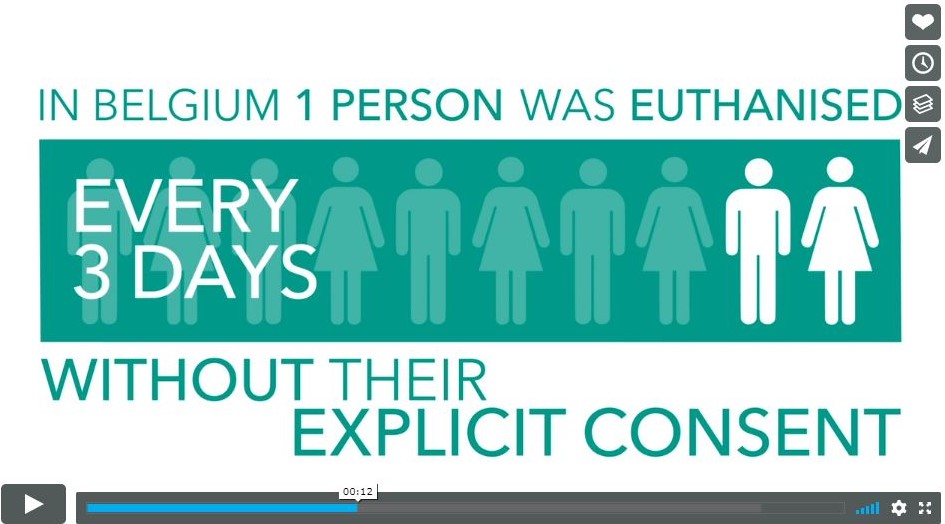 The video ad, Debate On Euthanasia Laws, misrepresents statistics around euthanasia in Belgium.

It appears on Archbishop Anthony Fisher’s Facebook page and a Vimeo channel run by the Archdiocese of Sydney, and is likely part of a series.

The ad falsely asserts that statistics in a 2010 Belgium study relate to Voluntary Assisted Dying when in fact they relate to palliative sedation, sometimes referred to as non-voluntary terminal sedation, a common practice in palliative care.

The ad fails to mention the study’s conclusions that the introduction of a Voluntary Assisted Dying law in Belgium in 2002 resulted in a fall in the rate of non-voluntary terminal sedation.

The 30-second video graphic opens with the line: “On 19 June, euthanasia and assisted suicide will begin in Victoria, how long will it take for Victoria to look like Belgium?”.

It then grossly misrepresents Belgian statistics on euthanasia, claiming “1 person is euthanised every 3 days without their explicit consent and in more than 75% of the cases, the decision was not discussed with the patient”.

The statistics used in the ad are drawn from a 2010 academic study ‘Physician-assisted deaths under the euthanasia law in Belgium’ (Chambaere K et al.)

Despite the ad’s assertions, this study is NOT about Voluntary Assisted Dying nor Voluntary Euthanasia.

In reality, it investigates terminal sedation (sometimes referred to as palliative sedation or non-voluntary euthanasia), the practice of alleviating refractory suffering in patients by sedating them into a coma from which it is expected they will never awake.

It is a standard practice in palliative care, as AMA (WA) President Dr Omar Khorshid admitted in July 2018, when he told Channel 7 News that doctors routinely hasten death: “We [doctors] shorten patients’ lives regularly if that’s the right thing to do at the very end of life”.

The Victorian Parliamentary Inquiry report (2016) into end-of-life care found terminal sedation to be widely practised in Australia, but it is:

"… not centrally recorded, the extent of its use is unknown, and no guidelines exist to regulate it."

This lack of transparency around terminal sedation is one of the reasons why Go Gentle Australia and others argue that a Voluntary Assisted Dying law is needed, so that the practice is brought out of the shadows.

GGA’s Ms Paul said: “The ad is completely misleading and highly inappropriate in the lead up to the implementation of Victoria’s assisted dying law and a coming debate in the Western Australian parliament about proposed Voluntary Assisted Dying legislation.

“These issues were extensively canvassed and found to be untrue in the both the Victorian and WA inquiries into voluntary assisted dying and in debates in the Victorian parliament which resulted in Victoria supporting the law.

“Terminally ill Australians in the final weeks of life deserve better from the Catholic Church.

“Go Gentle calls on Archbishop Fisher and the Sydney Archdiocese to show some moral leadership and immediately remove the misleading ad from circulation on their sites,” Ms Paul said.

More information: A forensic analysis of the deception at the centre of the Belgium study claims, written by assisted dying advocate Neil Francis, can be found here.

And a comprehensive explanation of assisted dying in Belgium, 'Separating fact from fiction about euthanasia in Belgium' by the author of the 2010 study himself, Professor Kenneth Chambaere, can be found on The Conversation website.

1. The study’s authors concluded that rates of Non-Voluntary Euthanasia fell after Voluntary Assisted Dying was legalised in in Belgium in 2002.

“[Non-Voluntary Euthanasia’s] occurrence has not risen since the legalisation of euthanasia in Belgium”.

2. The authors also found that the cases of Non-Voluntary Euthanasia in the study “in reality resemble[d] more intensified pain alleviation … and death in many cases was not hastened”.