After passing the NSW Parliament Lower House with a thumping majority in November 2021, the Voluntary Assisted Dying Bill has now proceeded to the Upper House. 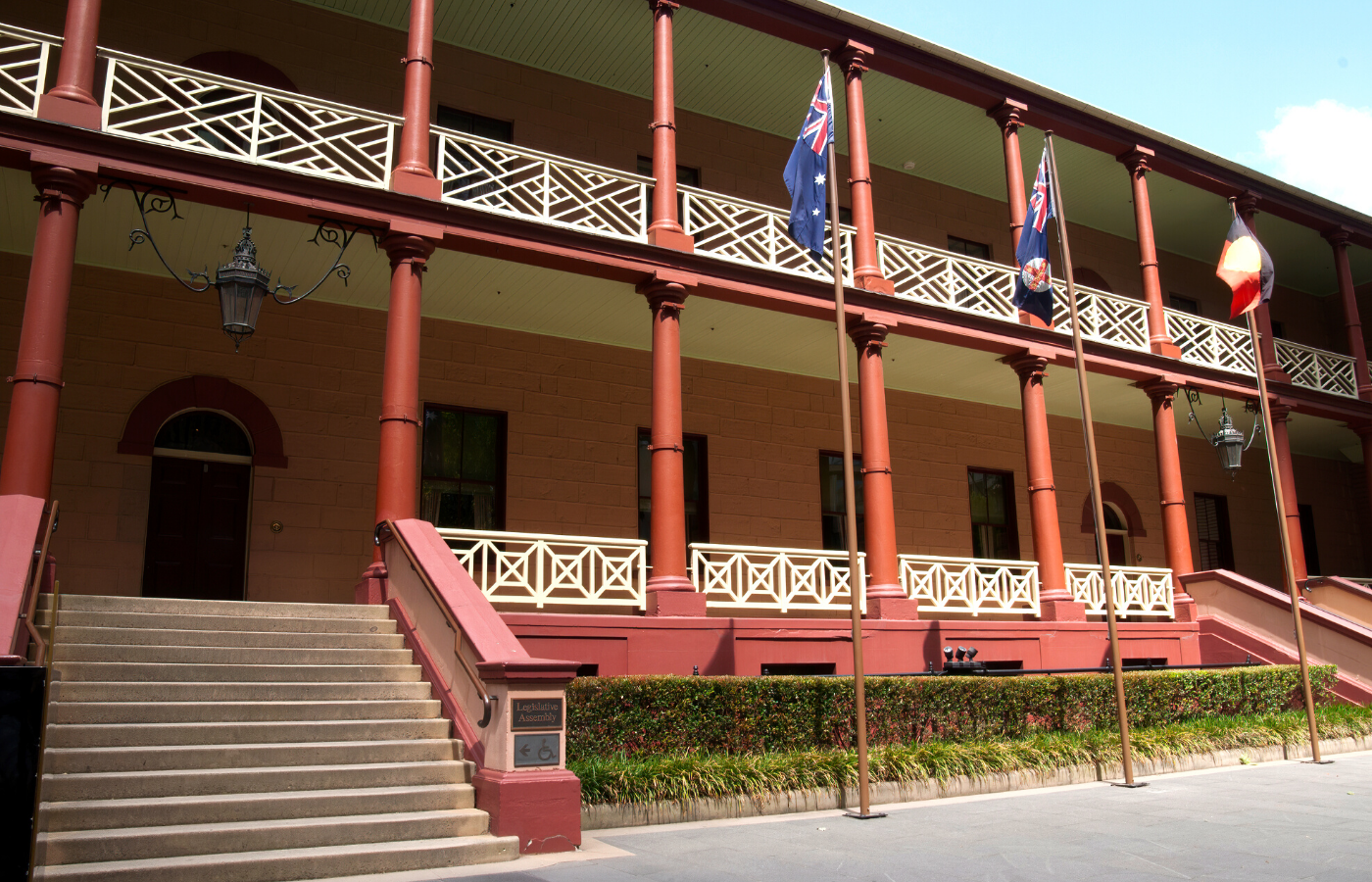 WHAT HAPPENED IN THE UPPER HOUSE?

Labor MLC Adam Searle gave his second reading speech to the Upper House, which will now move to debate the bill. You can read his speech in full here.

WHAT DID MR SEARLE SAY?

Mr Searle acknowledged the 'collective endeavour' of many individuals, organisations and his parliamentary colleagues in getting a Voluntary Assisted Dying bill to this stage.

He demonstrated the overwhelming support among NSW citizens for this reform, referencing a petition of 100,000 supporters presented to parliament by Dying with Dignity NSW alongside numerous opinion polls showing 70+ percent support.

However, he emphasised that he believed this legislation should pass not simply because of this public support, but because it's the right thing to do.

This is the third time in almost nine years that these issues and similar bills have been debated in this Chamber, but the context in which this debate occurs today is different... Whereas on earlier occasions New South Wales would have been a national leader, today every other State has already enacted voluntary assisted dying laws...

New South Wales is a laggard in providing this compassionate choice for its residents and citizens.

Mr Searle highlighted there had been some sensible amendments to the Bill in the Lower House - which passed the bill with 52 to 32 votes in November 2021 - to further strengthened the safeguards. The bill is robust and safe while also broadly consistent with other Australian state jurisdictions. 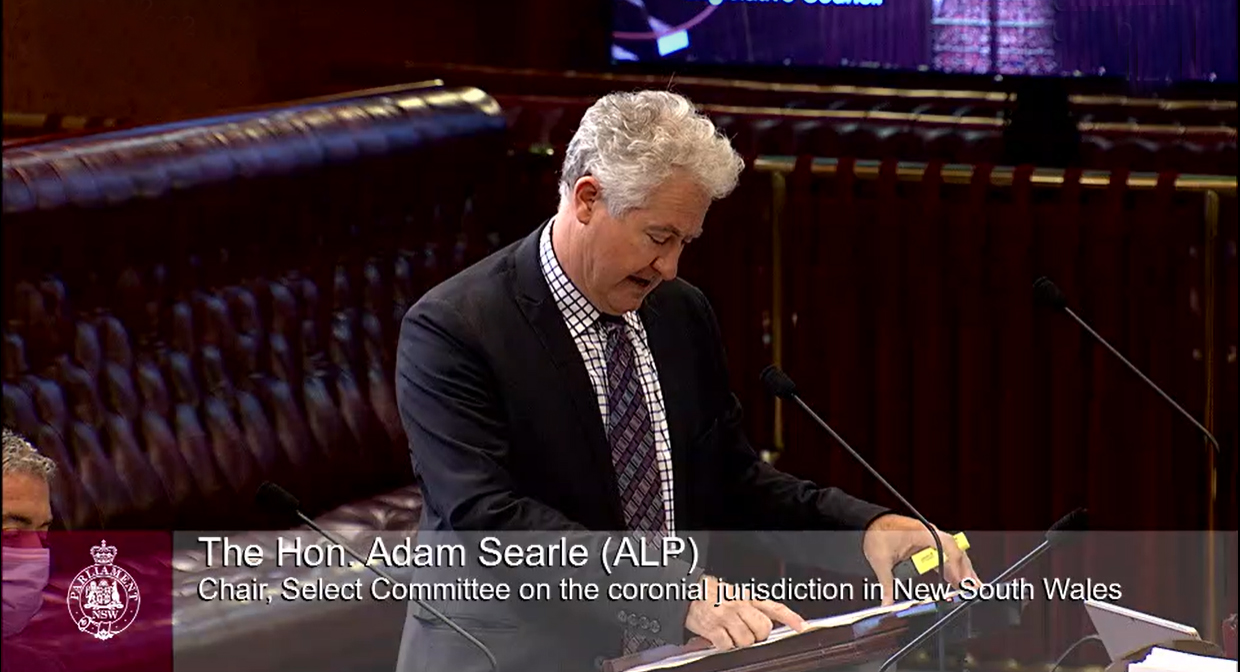 Towards the end of his speech, Mr Searle shared his personal experiences that have led to his belief in the need for this reform, including watching his father die a slow death to cancer over a period of six months where his suffering could not be relieved.

Mr Searle challenged opponents of the Bill, saying that to not legislate condemns dying people to endure physical and psychological suffering. He drew a clear line between suicidal individuals who tragically want to die, and people dying of terminal illness who cannot escape their imminent death and simply want a choice as to how it happens.

Mr Searle said dying was a 'great taboo' in our society and called for a frank discussion about the end of life. He said although death is a complicated and difficult topic, and one we often wish to shy away from, we must remember many in our community do not have that luxury.

Finally, Mr Searle highlighted that some health professionals are already helping people in their care to die peacefully, but it is happening without oversight and accountability; unregulated, unsupervised and unchecked. This is bad for individuals and unsafe for medical professionals. Given the range of overseas jurisdictions from whom we can learn lessons, legislating on this issue is the right next step.

Parliamentary process requires debate be adjourned for five days, after which the Second Reading debate can begin. During this, members will have the opportunity to make a speech about the bill. Like the Lower House debate, members have been granted a conscience vote. This means they are not bound to vote with their political party, as usually happens, but instead can make up their own mind on this issue.

The crucial question, however, is if enough parliamentary time will be allocated to prevent delays to this bill's progress through the Upper House. Private Member's bills can usually only be debated for a limited number of hours on Wednesdays. However, debate in the Lower House took approximately 30 hours. To ensure the bill is not delayed, we and other supporters are calling strongly on the NSW Parliament to allocate sufficient time to get this legislation passed.

WHAT CAN I DO TO HELP?

If you live in NSW, there are two ways you can support timely debate on Voluntary Assisted Dying in NSW.

1 Please will you sign this petition (the last push, we promise!)? Please also share this link with friends: https://www.parliament.nsw.gov.au/lc/pages/epetition-details.aspx?q=GJ4dfvM5HMkcInxR8OeCrw

2 Please also consider contacting your Upper House members to ask them to support the Voluntary Assisted Dying Bill 2021. We appreciate you may have done this before. However, this is the final hurdle in a long process, and we cannot contemplate losing out by one vote as a Bill did in 2017. Use our lookup tool to find your Upper House members' details.