"This story is a celebration of life and love and a testament on how to live while dying. This is my father’s story, a story of how he shared laughter and love every possible moment for as long as he could, but sadly it is also a story of suffering and cruelty."

I write to you not as your local constituent but as a member of the wider community, to convey a story which is all too prevalent within your local community. This has been the most difficult letter I have ever written and I ask that you read it through to the end.

This story is a celebration of life and love and a testament on how to live while dying. This is my father’s story, a story of how he shared laughter and love every possible moment for as long as he could, but sadly it is also a story of suffering and cruelty.

John Parker lived his life as a selfless advocate for the rights of others. He loved, and was loved by many, and taught us about integrity, social justice, compassion, leadership and patience but most of all he taught us to laugh and love.

Dad was 64 and in the throes of planning his retirement when on 10th May 2013 he was diagnosed with Motor Neurone Disease (MND), with the prognosis of 1 to 5 years life expectancy. For all who knew and loved him this was devastating news – we feared for him and the journey he was about to endure.

But it was Dad who made it easier on all of us. He believed that you never know what life has in store for you, and you just have to work through what you’re presented with and make each day count. Of course, this is exactly what he did, and he wrapped it all up in his infectious sense of humour. 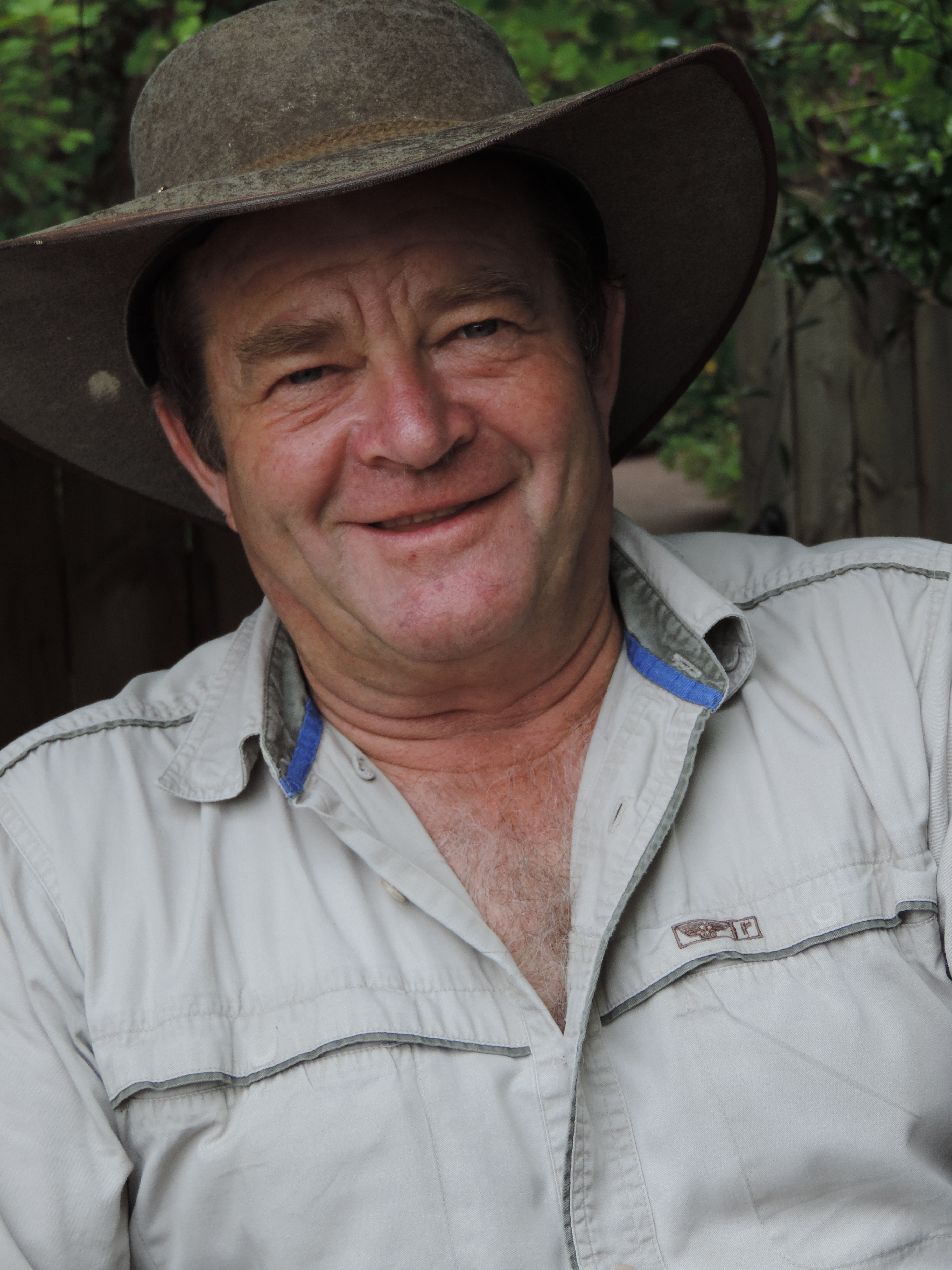 Dad kept working for as long as he could however due to his deteriorating health he finished up work and arranged house renovations for his future needs. At this point he had started using leg splints and crutches to move around but nothing was going to stop him from achieving his and Mum’s dream of seeing more of the Australia that they loved.  So in April 2014 they set off travelling in their caravan.

Just a few weeks into their journey, on the 10th May 2014, while in Hervey Bay Qld. Dad was taken to the Emergency Department of the local hospital.  He was experiencing numbness down his left arm with a burning sensation towards his fingers, accompanied by dangerously high blood pressure which was hard to bring under control. He was eventually airlifted to the Prince Charles Hospital in Brisbane, where he was examined over several days for suspected heart problems. A full body scan was carried out, and a growth was found in his brain. He was referred to the Royal Brisbane Hospital where he was diagnosed with a brain tumour in a location that was easy to be removed.   He was told that without treatment, he could expect to live 3-12 months, with treatment his life expectancy was anywhere from 18 months to five years, and this was based on the tumour alone.

He underwent surgery and the tumour was formally diagnosed as a Stage 4 Glioblastoma Multiforme, the most aggressive of all brain tumours.

Dad’s outlook on life didn’t wain and he chose to have both surgery and treatment. At this stage, he had no pain and he wanted to live as long as he could.

Dad underwent chemo and radiation treatments but unfortunately in April 2015 another tumour was detected and he was given a radiation treatment. Determined to keep travelling they set off again in May 2015 and were supported by his brother and sister-in-law. Travelling was now quite difficult for both Mum and Dad, as Dad was in need of more physical and mechanical assistance.

In July 2015, they returned home for medical appointments where it was identified that the remaining tumour was dead in the centre but the outside was still active.  However, after a few weeks at home they decided to return to holidaying.

Since his MND diagnosis in 2013 and during this period Dad’s MND progressed up his legs, into his chest, throat and arms.  He went from using walking sticks, to crutches, to a scooter, and finally a motorised wheelchair as his strength in his muscles deteriorated.

Dad had notably deteriorated by the time they returned from their travels in September with less core strength to hold himself upright.  He was now more reliant on his ventilator due to the muscles weakening around his lungs which meant his lungs wouldn’t inflate. He had previously only required this when he was resting in his chair or at night.

Dad’s reduced strength meant that he required assistance, even to move slightly in his chair to relieve the pain of pressure from sitting. We would do this as a team, grabbing him by his pants on the front and back and lifting him. Dad wanted his legs stretched and his knees bent to relieve the stiffness, this was also painful.

In mid-October Dad was at serious risk of pneumonia as he did not have the strength to cough up the phlegm from a simple cold. On his way to hospital with breathing difficulty, Dad described to the ambulance officers what he thought was an anxiety attack about his inability to breathe, as well as a fear of falling when being lifted using a hoist or being rolled over in bed.

Around this same time, it was apparent to those around him that something else was occurring as Dad’s speech became more slurred and the left side of his lip was starting to droop.  It was assumed to be a result of the brain tumour.  On 21 October 2015 after a follow up MRI, Dad was told that the tumour he had been treated for in April had now doubled in size. Treatment was no longer offered.  Just 7 days later Mum was advised that the tumour was 3.5 x 5.1 x 4.3 cm in size and that we should be planning for a Christmas with Dad in November.

During October and November Dad became even more reliant on the ventilator and needed it most of the time. However, as the muscles weakened in his throat and voice box, he was less able to project his voice, and communicating his needs through the ventilator’s mask was even more difficult.  He was constantly sucking on lozenges as his lack of saliva production led to a constantly dry mouth.  He was now incontinent and also required support to eat and drink.

In the 3 days before he went to hospital, Dad developed a severe bladder infection and also had an enlarged prostate.  On 10 November 2015, in significant pain from his UTI, Dad was admitted to Calvary Health Care Bethlehem Caulfield (specialist MND hospital) where his pain and deteriorating condition was managed.  On arrival at the hospital, we were told to prepare for Dad to pass at any time. His kidneys were starting to shut down and he was passing a significant amount of blood through his urine.

Dad was in hospital for another 18 days until he passed, and over that time he deteriorated such that he could no longer eat, his inability to swallow put him at risk of choking and he didn’t have the strength to cough anything up.  His bowels had become impacted and he was no longer able to suck on lozenges to relieve his dry mouth which now required regular wetting with a sponge but this had to be done quickly as he needed his mask on to breathe.  He had lost all movement apart from his right arm but eventually even this reduced to a ‘thumbs up or down’, or a squeeze.

He was in pain from not being able to move his body and then in pain from being gently moved and stretched.  Eventually, he was unable to express if he needed moving, what he wanted moved, if the pain from being moved was too much or what else might be hurting.  This inability to communicate was due to the MND and brain tumour and not that he was unconscious or heavily medicated.  One day my brother and I were sitting next to Dad and heard him making noises but we weren’t sure if he was in pain or if he was upset.  From a ‘thumbs up or down’ we were able to establish that he was upset and crying, which was the first time throughout his journey that we had witnessed him cry.  We did not feel we were able to offer much comfort as we could not determine if they were tears of fear or tears of pain or if in fact he had something he wanted to say.

On 21 November, 7 days before he died, Dad developed small blisters around his right eye, which were diagnosed as shingles. The blisters spread down part of his face and although he was not able to communicate, the pain he was feeling was obvious as the mask he needed for breathing lay directly across the shingle blisters.  Upon checking Dad’s swollen eye, the doctors advised us that as a result of the shingles, an abscess was eroding the back of his eyeball. His medication was increased to deal with the pain.

During his final two days, Dad pushed off his breathing mask and survived on extremely shallow breaths.

On the day of his passing I asked the nurse if today would be the day as his fingertips were turning purple due to a lack of oxygen. She said that it would be, and it was.

I am not sure what choices Dad would have made as he prepared for his death, but I absolutely know he would have supported others in their right to make the most personal and the most difficult decision anyone has to make.  Fortunately, Dad never had to watch a loved one suffer in the way he suffered, but I know him and I know if he had, he would be co-signing this letter with me.

Dad showed an amazing ability to love and laugh and he shared that love and laughter until he could no longer squeeze our hands or put up his thumb.  He did this for us, to make our journey of watching him endure two terminal illnesses a bit easier.  It saddens me deeply that he was not given any choices regarding how he might want to spend the last days or weeks of his life.  He may have chosen to do nothing differently but that in itself is a choice to which he should be entitled.  Life is about choices and death is a part of life.

We are also aware that even though Dad was diagnosed with two terminal illnesses he was extremely lucky.  He was lucky to have had minimal pain until the last month of his life and he was lucky that the MND started in his toe and slowly worked its way up his body.  For many, pain is not absent and the inability to swallow, communicate, move and breathe from MND or any terminal illness can occur quickly and be a prolonged traumatic journey.

I encourage you to support the Voluntary Assisted Dying legislation that is being presented shortly to State Parliament and to lead the way in this country in providing end of life choices to people who are terminally ill.

If you would like to discuss this letter with me please don’t hesitate to call me.

CC.  All Members of the Parliament of Victoria