A coalition of pro-VAD community groups has refuted claims by Queensland’s Catholic Church that people and workplaces will be forced to participate in Voluntary Assisted Dying. 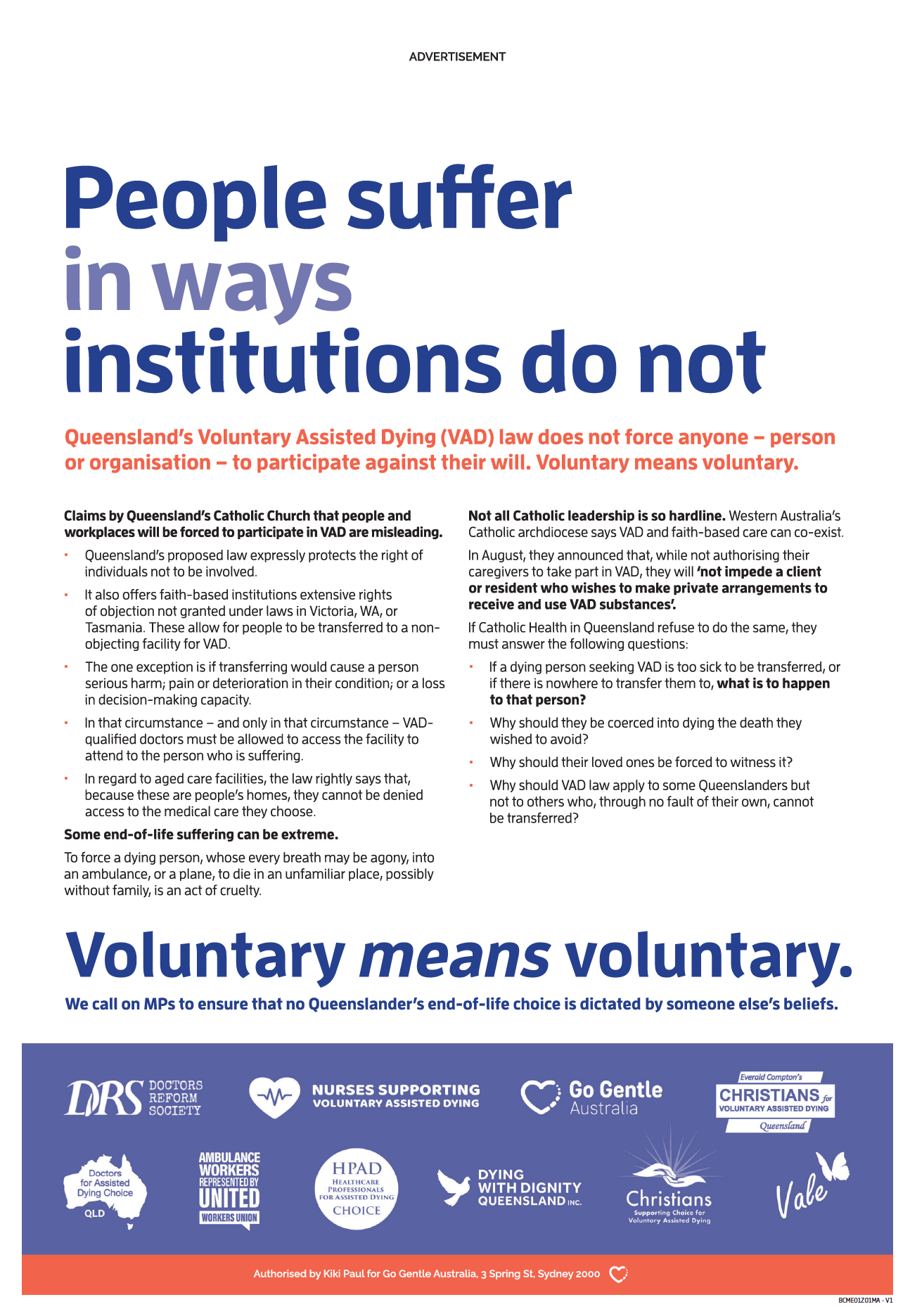 The coalition, which includes Christian and medical groups, has published an advertisement in the Sunday Mail/Courier Mail describing the Catholic Church’s claims as misleading and not an accurate representation of the draft Voluntary Assisted Dying Bill endorsed by the Queensland Law Reform Commission.

“Queensland’s Voluntary Assisted Dying law does not force anyone – person or organisation – to participate in assisted dying against their will,” the ad reads. “Voluntary means voluntary.”

Kiki Paul, Go Gentle Australia’s CEO, said with just 10 days before the Voluntary Assisted Dying Bill was debated in parliament, it was important that the misleading claims were challenged.

“Contrary to what the Catholic Church claims, the proposed law expressly protects the rights of individuals not to be involved in VAD. It offers faith-based institutions extensive rights of objection not granted in other VAD laws,” Ms Paul said.

“The law stipulates that an objecting facility can facilitate a person seeking VAD to be transferred to a non-objecting institution in order to fulfil their wishes.

“The one exception is if transferring would cause serious harm to the person.

“In that case, the law simply says the facility must allow willing doctors onto the premises to attend to the person’s needs. This is not unreasonable,” Ms Paul said.

The hard-line stance of refusing, under any circumstances, to allow VAD doctors and other medical professionals onto their premises to attend to dying patients is at odds with the Catholic Church’s approach in other states.

In Western Australia, while Catholic facilities and employees will not actively facilitate or participate in VAD, the Church will not stand in the way of a person’s legal right to access an assisted death, even on Catholic healthcare premises.

“This is a middle path that minimises potential harm to terminally ill people and recognises that people suffer in ways that institutions do not,” Ms Paul said.

“We are calling on Queensland’s MPs not to be distracted by the misleading claims and ensure that no Queenslander’s end of life choices are dictated by someone else’s beliefs.”