When my daughter Scarlett was 11-months-old, she woke up one morning and her body had turned to jelly. She couldn’t crawl. Her head flopped sideways. And she screamed and screamed and screamed, with a haunting pitch that will stay with me forever. It sounded like she was imploring me to help her.

Her diagnosis was a double whammy. Neuroblastoma, cancer of the central nervous system. An ugly, ugly cancer, fast spreading, difficult to treat. Also, a secondary condition – a rare and dire immune response to the cancer known as Opsoclonus Myoclonus Ataxia Syndrome. One in 10 million children draw the short straw, and Scarlett was one of them.

The outlook was devastating. Even if she did survive the cancer, her brain was being attacked by antibodies that were confusing brain tissue with the tumour – and they couldn’t tell us how to stop it. As her little body convulsed with spasms and her eyes spun around in circles, we were told she may never walk, or talk, or live. They just didn’t know, and I was told unequivocally to expect the worst.

But this story isn’t about Scarlett. It’s about my dad, Gerald Charles Briggs. He was the first person whose arms I fell into when I 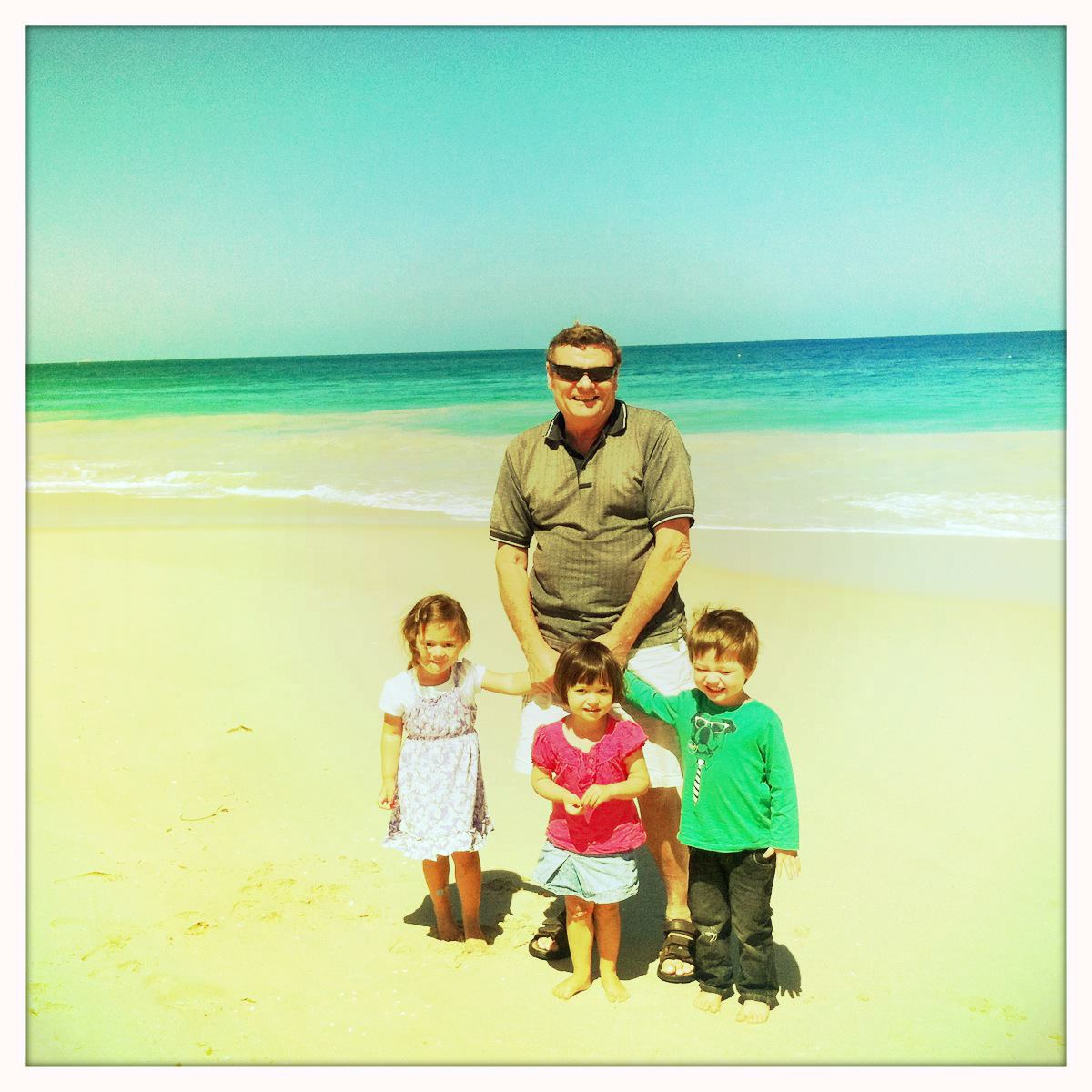 heard my bright, sparkly, funny, smart baby girl might never be the same. Or worse, leave us forever. I remember him saying to me, “We’re all in this together, we’re all going to share this load and get her well again.” That was my dad. He was our family oak, our leader, our backbone. I’m not sure I could have got up off the floor without him.

With him leading the way, gently propping me up, that’s exactly what happened. Scarlett defied all the odds for a wonderful outcome. Her tumour was Stage 2B, 4cm glued to her breastbone, contained but just a millimetre before spreading to the spine. It was resected with surgery. She had a rare, successful response to treatment for OMA and within eight months, was in full remission. She passed all paediatric tests with flying colours. Her oncologist was amazed, her neurologist utterly perplexed.

This should have been a happy ending for my family, but it wasn’t. Three months after Scarlett gained remission, my dad started coughing up blood. Shortly thereafter we were told he had three months to live. Cancer of the pleural lining of the lungs, thanks to years where he was required to spray asbestos as a young apprentice in the building industry.

My dad was an absolute powerhouse in life. I’ve never known anyone more ballsy. He could work 16-hour days of manual labour without breaking a sweat. He wrestled snakes and carried fridges on his back. He sawed his finger off once and didn’t flinch. He slashed his leg open and got out the needle and thread and sewed it right up.

He mocked Panadol, never took one in 62 years.

He fought cancer like a warrior. He turned a three-month prognosis into five years. Even with advanced lung cancer, he’d still scale my roof and clean my gutters. For such a hardworking, proud man, being sick and not being able to work like a Trojan as he was accustomed was torturous.

When the end came, my dad’s death was far more terrible than anything I ever could have imagined. Palliative drugs were not coming close to controlling his pain. For four days we sat in an airless room with him, as he screamed and bellowed and writhed and cried. The previous night he was so panicked from the rising pain level he had tried to get up and run from it. He crashed down, smashing his head and cutting it open. When the nurses found him on the ground, he was covered in blood and sobbing and begging to be “put down”.

I’ll never forget sitting next to my darling dad as he lay there in a nappy, two twig like bones for legs poking out, covered in purple bruises, drinking from a child’s sippy cup with a black eye and stitches across his forehead. He looked heartbroken. His urine bag was filled with what resembled dark brown syrup. His left eye was hanging down. And he was in absolute agony. All we could do was hold his hand and play his favourite music and pray for it to end. He endured an agonising 96 hours of torture before he finally passed. There was nothing remotely peaceful about it and his body never stopped writhing or shouting out.

I can’t speak for my dad. I don’t know if he truly would have opted to end his life earlier if he had the choice. But I can speak for myself - and my mother and sister, who sat in that room with me, echo these views. I never want to endure that extreme suffering, and I never, ever, ever want my children, family or loved ones to play witness to it. My dad was destroyed. I still have nightmares, I still walk around with a giant crack in my heart, I still fear meeting the same level of suffering one day, and I suspect I always will. It’s a trauma I will never recover from.

Dad’s death was so violent his own grandchildren couldn’t come and say goodbye to him. I believe it’s my right to opt for a controlled and compassionate end to my life, determined only by me. I’m so sorry my dad was not afforded the same rights. He was a good man and a quality human who contributed kindness to the world and deserved so much better.