Dear Mum, I’m so sorry I didn’t kill you.

I came close, believe me. The pillow was millimetres from your mouth. But I just couldn’t do it. How could I take life from the one who gave it to me? 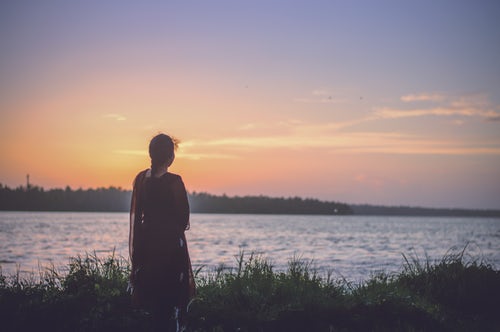 My suckler and snuggler, role model and mentor, nurturer and nemesis: you were all those things. To your daughters you were an impossible picture of perfection. Successful career woman, devoted wife, loving mother – a feminist before your time.

You laid out your manifesto: ‘I want you to be independent women. You don’t have to have babies. The world is your oyster. Go out there and show them what you’re made of! Who says you have to be sugar and spice and all things nice?’ Brave, bold and beautiful, you always called a spade a bloody shovel.

Possessed of a wicked wit, you could cut to the quick. That humour came in handy the day you were diagnosed. The oncologist held up an X-ray dappled with snowflakes (unusual, on a sunny day in March). ‘You can see the cancer here, here, here…and here,’ he said. ‘It has spread from the pancreas to the lungs. Any chemotherapy will be palliative.’

You turned to Dad with a wry smile: ‘Might as well go outside for a smoke. No point giving up now!’ I had to laugh. At a family meeting you set KPIs for the coming months. There was to be no pity, no moping, and no wailing, but there must be mercy. A conversation we’d had many times around the dinner table suddenly had currency. ‘If I lose control of my faculties then put me down,’ you said clearly. ‘They do it to dogs. Why can’t they do it with us, as well?’

We all agreed. Voluntary euthanasia was a given in our house. The next six months were the worst – and best – of my life. We looked at old photos, decorated with 1970s flares, floppy sunhats and floral jumpsuits. (Incidentally, why did you sew matching outfits for Suzie and me? We weren’t twins! I should have taken you to The Hague for those purple and green smocks. They were a crime against humanity.)

You gazed at me lovingly as I stabbed needles into your stomach, kept down a modicum of meals, and patiently painted shadow boxes as keepsakes. We laughed at the bandanas you made us wear to your chemo sessions, at my dreadful Manuel impressions in the kitchen, and at the stupid things people said when they dropped by. ‘Oh, we know it’s terminal. But it’s a gift, isn’t it? All this special time you’ll be having together in these next few months,’ they’d sigh.

Well, if that’s a gift, I want a refund. It’s clearly faulty. One day it got too much. We could no longer care for you at home. We drew up a roster so there was always someone to hold your hand during those bright sunny days and dark desperate nights. Your screams of pain were blood-curdling.

It was a Tuesday, I think, when I pinned the oncologist to the wall. ‘Is there nothing else you can do for my mother’s pain?’ I pleaded. ‘Can’t you up the morphine to put her out of her misery?’ ‘If I do that, I’ll lose my job. I’m sorry,’ he answered kindly. We asked the nurses. ‘Please, someone, anyone, end this godforsaken suffering.’ (Which was a big call for an atheist – I had been forsaken long before this.)

They, too, were kind, patting us on the back and saying, ‘There, there. It won’t be much longer now.’ It made me wonder, how long is too long? Is there a mathematical equation for this? ‘I’ve heard three shrieks, five hollers, and one “Please, kill me now”. Is that enough, nurse?’

So we decided to do it ourselves. Suzie stood there all night pressing that bloody red button to flood your body with morphine. The next day she showed me the bruise on her thumb.

‘I know I could go to jail but I don’t care,’ she declared.

But her bravery was for naught. You kept breathing. And writhing. And screaming.

But in the end, I couldn’t do it. I was weak. A coward. Not my mother’s daughter. I collapsed on the floor, sobbing. You must have known: you died hours later. Finally, you were in peace.

Mum, I hope you forgive me. Not for the clumsy way I’ve written this letter (you were always a masterful wordsmith) but for not having the courage to help you when you needed it most. If it’s any comfort, Dad, Suzie and I are campaigning for voluntary euthanasia.

Let your suffering – and that of so many others – be a lesson to those short-sighted, selfish, puerile politicians who refuse to show compassion to their fellow man. And woman. How many of them have seen someone they love die in agony, and live with feelings of grief, regret, and helplessness? Like I do.

Love you, Mum. Your daughter, Tracey