Rodney Syme AM was a man of deep and unshakeable principle who, more than any other, made possible the legalisation of Voluntary Assisted Dying across Australia. 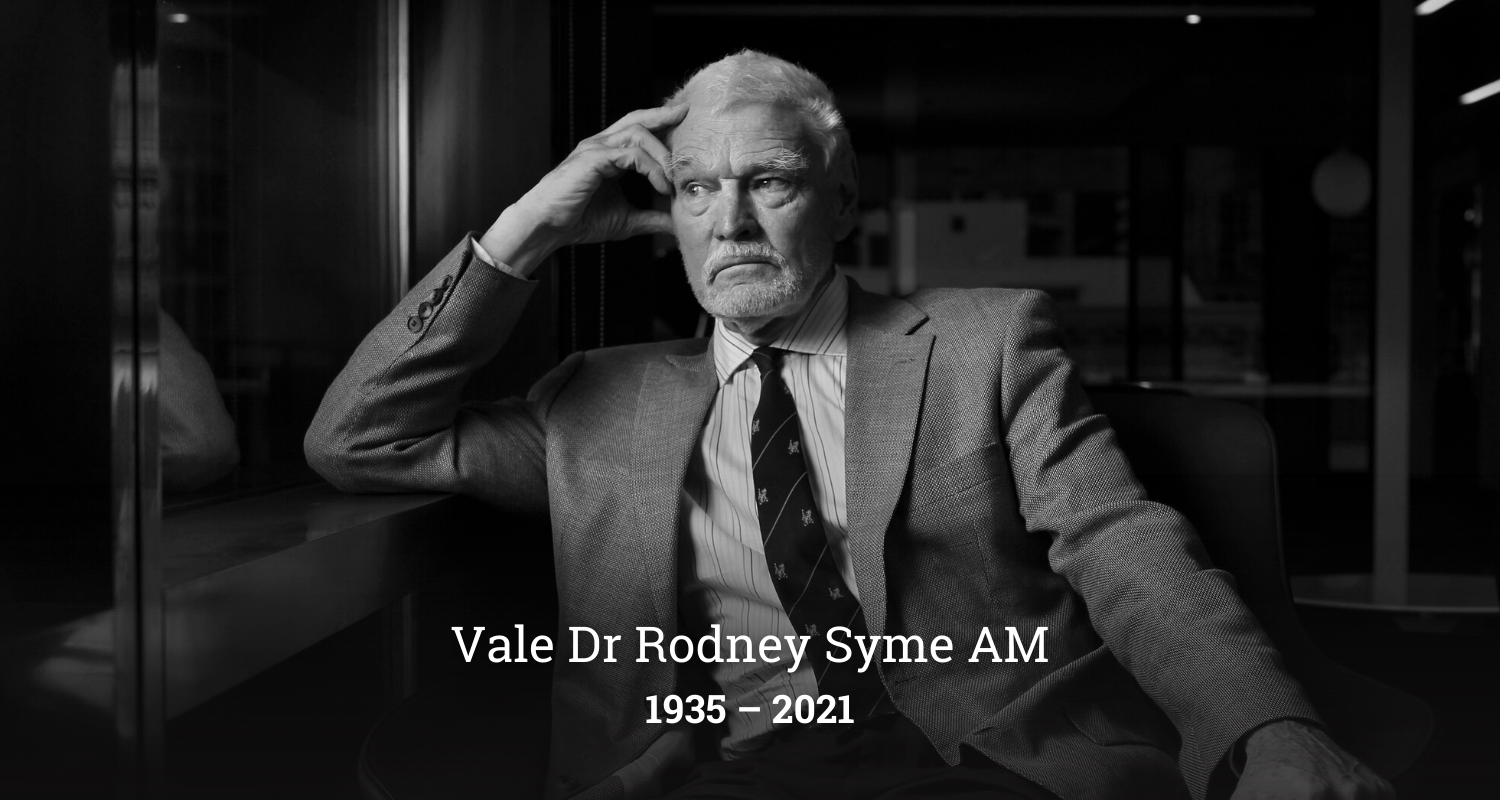 Rodney came from medical royalty. His father, Bob, had been a respected surgeon. His grandfather, Sir George ‘Silent’ Syme, had left his established medical practice at age 54 to tend to the wounded at Gallipoli, in the hope of encouraging other doctors to join him. When he returned he founded the Royal Australasian College of Surgeons.

Rodney could have remained, comfortably ensconced, as one of Victoria’s most respected urologists, but in his 40s he met a patient called Betty who had untreatable neuropathic pain. He recounted what happened when I interviewed him for the first series of Better Off Dead back in 2016:

She was on the first floor, and it was agonising. I would come to visit her and sit in my car – I can remember it well – for 5 minutes, trying to summon up the strength to go and see her. That was bad enough for me. Imagine what it was like for her and her family.

… I just felt that was the most appalling thing that would happen to anybody, and I thought to myself... if I'd been in that pain, I didn't have the slightest doubt that I would have ended my own life rather than go on like that. And of course, I knew that that was possible for me. I was a doctor and I had access to medication… I had colleagues who I knew could help me if I needed help. So, I thought … What is ethical about me being able to end my own suffering but my patients have to go on? And that really changed my whole life. For the next 20 years after that, I thought very, very deeply. I studied the medical literature, the bioethical literature. And formulating my views, I began to make public statements. And as a consequence, complete strangers started to approach me.

Over the next four decades, Rodney would go on to counsel thousands of people seeking assistance to die.

They had powerful arguments for needing advice and assistance. I found I couldn't deny them the respect of talking to them and in some cases helping them. But that is an interesting point because in many, many cases just talking to them was powerful therapy, and many of them didn't need anything more than that.

I witnessed this first hand when I stayed with Rodney at his place on Phillip Island. The first night I was there, three calls came in, one after the other, from people seeking Rodney’s help. I listened as he carefully and patiently interrogated their situation and answered their questions. He didn’t rush to either judgement or conclusions, but sought to reassure them that this was just the first conversation, one to be continued. Each call took about an hour and Rodney’s evenness and careful note-taking never wavered. His was the embodiment of what the Dutch call “due care”.

Everything Rodney did was done with due care: The meticulous way he detailed the cases of those he assisted to die; the decades assiduously educating Victorian politicians about the need for VAD law; and the forensic dismembering of opponents’ arguments.

That he did all this in the face of disapproval and black-banning from senior members of his profession, investigations by police; and hearings into his fitness to practice, tells you much about why I consider Rodney to be the most principled man I have ever met.

I remember sitting on the panel of ABC TV’s Q&A in 2016 and watching as host, Tony Jones, put it to him that he was actually trying to provoke the police to prosecute him and put him on trial. Without the slightest hesitation, Rodney replied:

Yes, indeed, because I would argue… that I can produce and provide a person with medication which provides them with palliation, relieves the psychological and existential suffering which they have when they are facing a dreadful death and I believe that is a palliative act.

Had Rodney been found guilty of assisting a suicide, he was liable to up to five years in jail.

Who else can you think of, in this country’s recent history, courageous enough to put their liberty on the line in order to help others?

It is telling that no arrest was ever made. No court case ever held. Such was the fierce clarity of Rodney’s thinking, backed by years of reading and unmatched professional experience in dealing with people facing the end, that only a fool would have put him on the stand for cross-examination.

Just once, was he put ‘on trial’ – charged with being a ‘serious risk to persons and to public safety’ by the Medical Board of Australia for giving terminally ill Bernard Erica illegal, life-ending drugs.

In his affidavit in support of Rodney, Bernard, who was dying of cancer of the tongue and throat, wrote:

The effect of his advice and support has been extremely valuable. None of the other doctors who have attended me have provided such benefit and peace of mind. Dr Syme’s care has had a profound palliative effect.

After an extended hearing, the Victorian Civil and Administrative Tribunal, agreed. What Rodney offered Bernie was, they found, the essence of palliation.

I don’t know – and perhaps only Rodney’s careful records will reveal – how many people he provided with medication which gave them control over their final weeks and months. I do know that, every time he did it, he was breaking the law. And I also know, from having met some of those people, that his courage, compassion and ‘due care’ made a profound difference to their lives.

In this work, as in his advocacy for VAD, Rodney was tireless. Advocates from around Australia, and across the decades – back to Marshall Perron in Darwin in 1995 – have turned to Rodney for advice, counsel, and reassurance.

Always, he was there. Always, his opinion clear and deeply thought-through. There is no doubt in my mind that, in Rodney, we had a man more experienced in end-of-life and its many forms than any other person alive.

What Rodney was not, was a zealot. Though his principles were unshakeable, he didn’t allow the rightness of his thinking to blind him to political reality. Even though Rodney firmly believed in – and made an unarguable case for – a VAD law based on suffering, he understood that any such law in Australia would only pass if it also had a time-limit. As such, he got behind the ultimately-successful campaign to legalise VAD in Victoria in 2017 – a success which has seen the dominoes of all but one other State fall.

As recently as a fortnight before his death, Rodney was still actively trying to organise a national body to allow VAD knowledge to be discussed and shared. He was also seeking to introduce better methods for practitioner administration, based on the Swiss model, which would lessen the load for doctors asked to end another’s life.

He was indefatigable. Unbreakable. Or so it seemed.

But, now, the mighty oak has fallen. There seems a vast, empty space in the forest where he once stood. That familiar, comforting shadow no longer cast.

Except that, as we now know, forests are not just a series of individual trees clumped together. They are a fully interconnected ecosystem, with vast networks of underground roots and capillaries, passing nourishment and information from one tree to the next.

For years now, the mighty oak of Rodney Syme, has quietly nourished each of us; with information, and by example. While his passing fills us with grief – and we will miss him in our bones as mentor, friend, and guide – we carry with us in our veins Rodney’s life’s work; Rodney’s method; Rodney’s unshakeable commitment to principle.

It seems hardly adequate to say that we have been privileged to know, and to work alongside, Rodney Syme.

When he died his son, Bruce, sent me a message: “The great man has gone."

He was a great man.

He goes with every honour and with our deepest gratitude and love.