'It's allowing me to be a better man to the end' 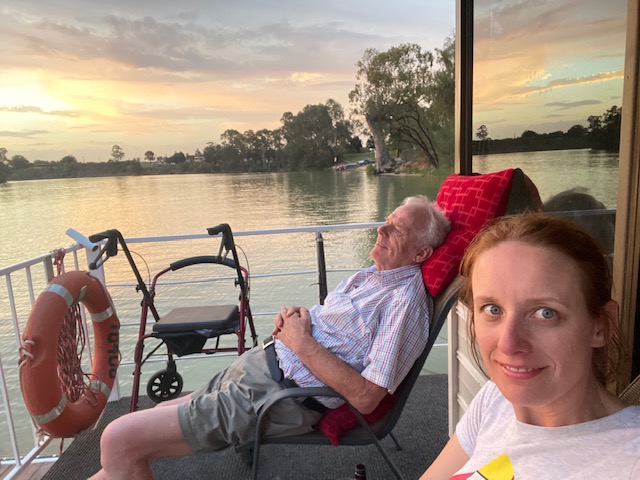 Motor neurone disease was a delayed diagnosis for dad, finally arriving when the weakness, the weight loss and the muscle twitching left no doubt in my own mind. It was shadowed in a range of other health issues that clouded its appearance, frustrating him with loss of function and strength for no good reason.

His deterioration was so rapid, I was surprised that he didn’t bring up voluntary assisted dying earlier. I had been told he was loosely commenting on "not being around by July" or "sorting things out".

I do believe he would have taken his own life when he physically could have, but his knowing about VAD in Victoria gave him the courage to continue on and live with us for longer.

He told me it was a lifesaver. Saving the lives of my mum, my sister and I, so that we didn’t have to deal with a messy ending by his own weakened hands. Dad’s form of MND took his limbs away one by one; stealing his ability to walk, lift himself, get off the toilet, and eventually out of bed.  Soon he will be locked in his own helpless body, with his breathing following the same path.

This loss of physical independence he has borne inspiringly well for a big strong man’s man. But there will be a time when enough is enough. That line in the sand is different for everyone.

Our pathway through applying for VAD has been difficult. At times seeming almost impossible. The lack of access for people outside metropolitan Melbourne is palpable for those with degenerative neurological conditions. The three-step medical opinion and strict time lines, all of which must be done in face to face appointments, in someone who with every passing day loses strength, the ability to sit in a chair, to talk on the phone, let alone travel, is heart achingly painful.

These hurdles potentially making it ‘too late’ to find someone to assist, too late to travel, and maybe at the end, too late to administer independently.

When the ethical choices of your medical carers determines your ability to access a legal end of life choice, is that the best we can do? Is that fair? Is that equity of care?

I am so encouraged by the existence of this legislation – but there is more we can do, we can do this better. It shouldn’t be so hard that one is tempted to give up. The fear in Dad’s eyes as he described a carrot dangling in front of him that he was worried he couldn’t reach, leaving him to die the death he never wanted inspires me to try and make this easier for others who choose to walk this path after us.

“It’s allowing me to be a better man to the end.”

Postscript: After several frustrating barriers and delays over 100 days, Allan's voluntary assisted dying medication was delivered to him on the morning of 17 June 2020. He died peacefully later that day, surrounded by loved ones.