Over the past few weeks, we’ve been asking you to sign a petition to NSW Parliament in support of voluntary assisted dying (VAD) - yes that’s right, another petition!

If you were one of the 100,000 who signed Dying with Dignity NSW’s petition last year, you may well be asking why another one, and why so soon?

The answer is MPs in the Upper House need to hear directly from the 80% of people who support end-of-life choice. Your signature sends a powerful message and is vitally important. 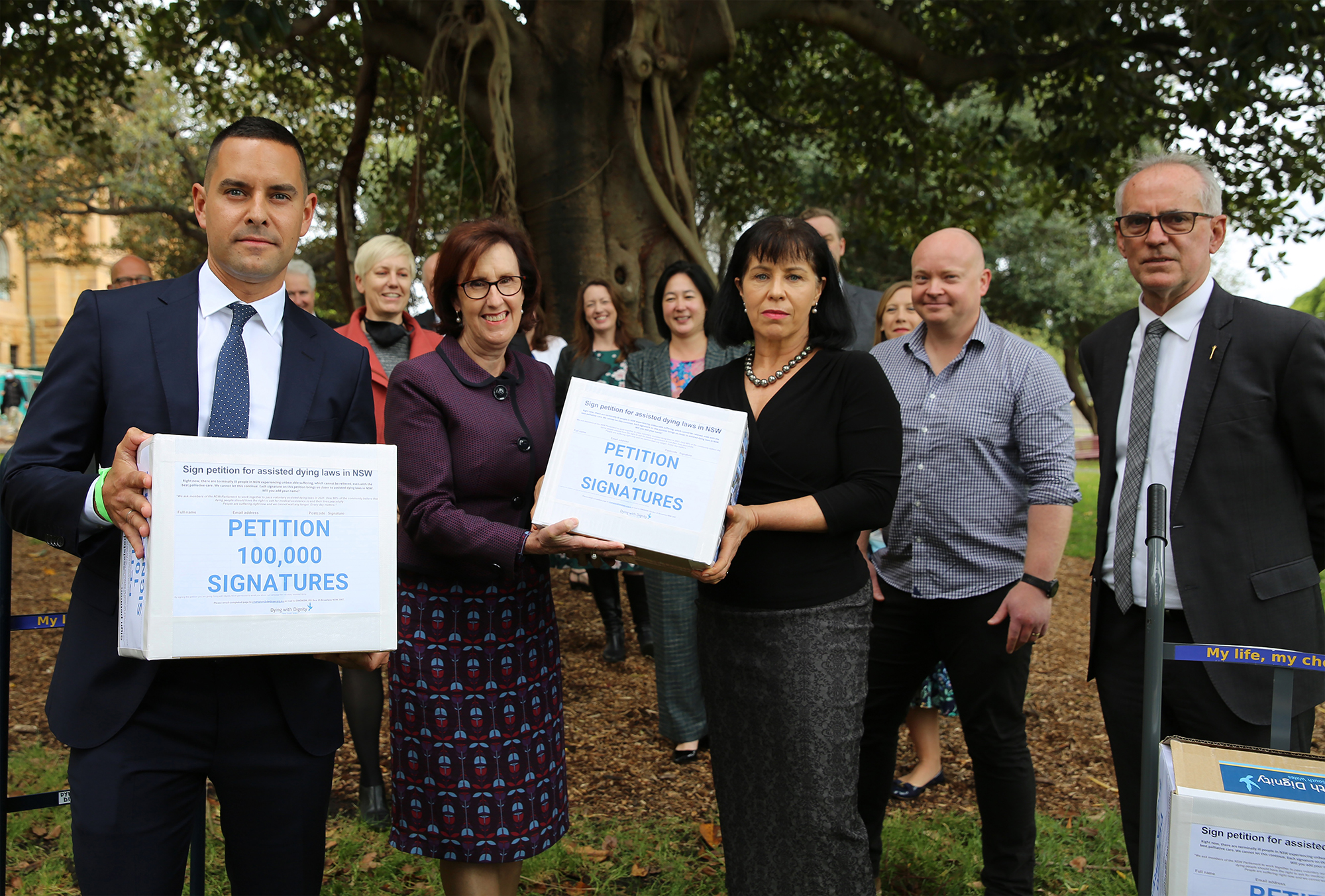 What happened to the last petition I signed?

It had a big impact. The 100,000-strong petition in favour of a Voluntary Assisted Dying law sent a strong message to the NSW Parliament that the public wanted this law. It worked. MPs in the Lower House passed the bill with a strong majority. The visual of all your signatures piled up on trollies also earnt plenty of media coverage - which is extremely valuable.

What’s more, this petition was also tabled in the Upper House by Greens MLC Cate Faermann ahead of debate there. This means MPs in the Upper Hpuse - where the future of this law will be decided - had to take notice and acknowledge receipt of the petition. The community’s strong support for voluntary assisted dying is now on the permanent public record. (Everything that is said in Parliament is recorded and written down on a publicly available record called Hansard).

This means that those 100,000 people who took 30 seconds out of their day to sign Dying with Dignity’s petition have collectively had a huge influence on NSW MPs. 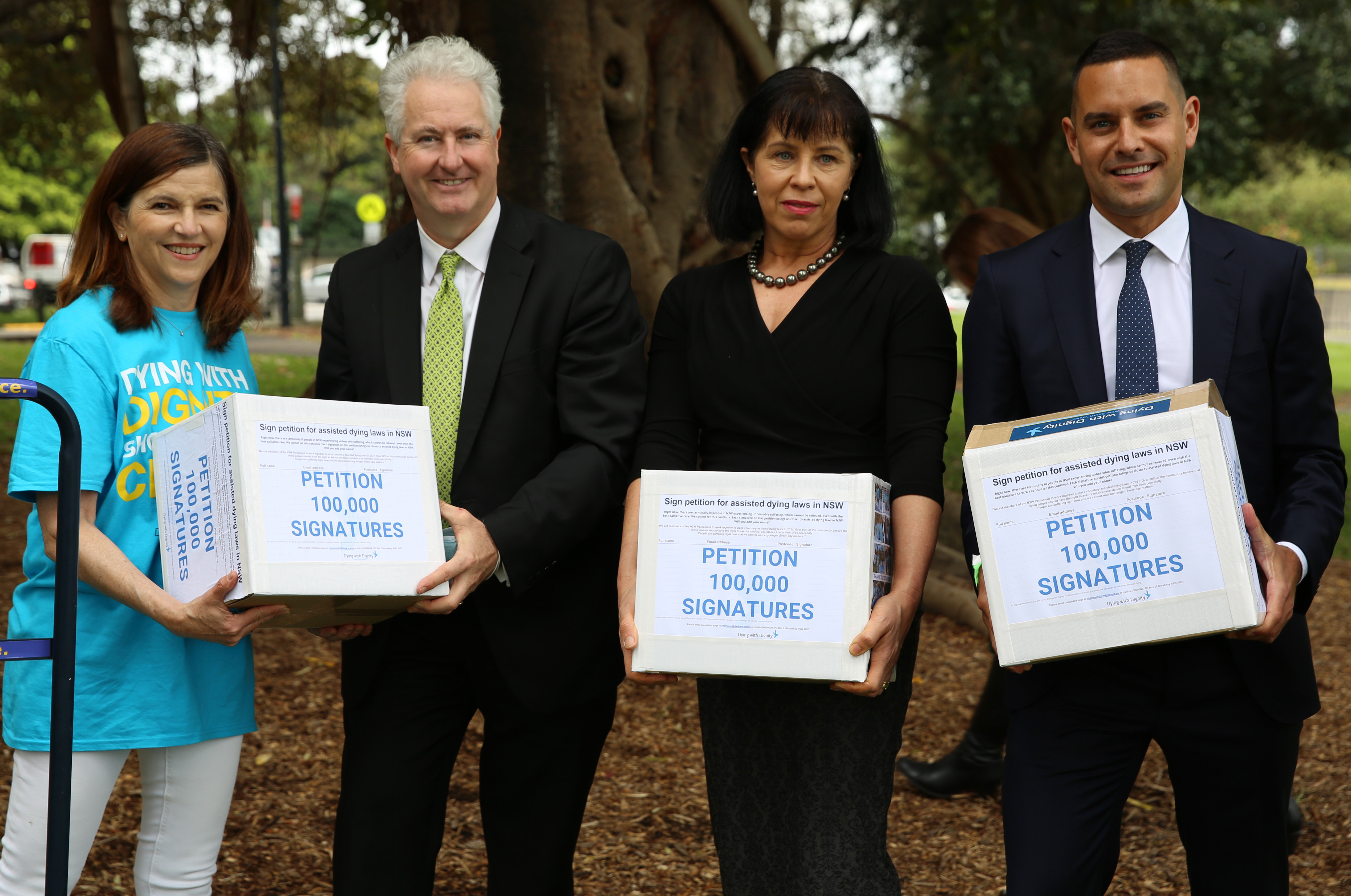 Why do we need another petition? 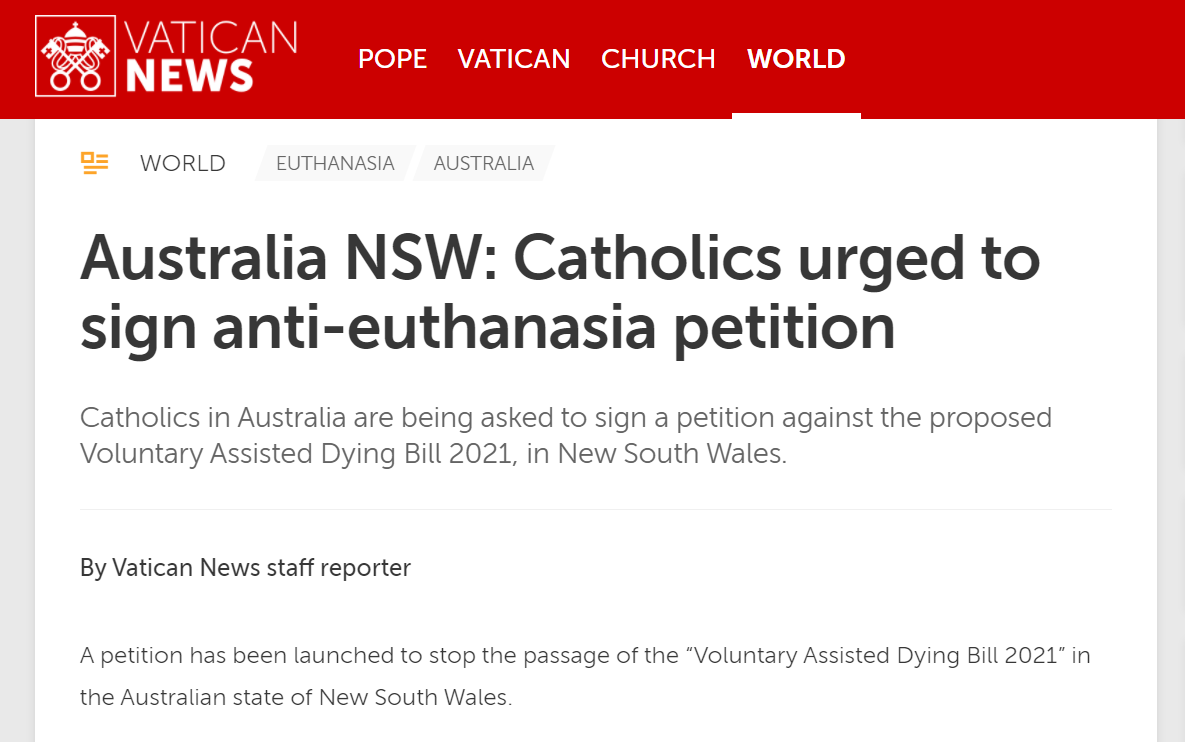 Simply put, our opponents have been busy building their own petition to try to suggest community sentiment has changed. Even the Vatican has helped promote it.

We know more than 80% of us support VAD - we must make sure we are not the silent majority. We must be vocal in our support and ensure a small number of opponents - and their petition - do not speak for all of us.

This is why we’re asking for another 30 seconds of your time to sign and share the petition across your networks - whether that’s emailing the link to friends, sharing it on Facebook or sending it around work.

It’s natural to feel some ‘petition fatigue’ every now and then. We’re constantly asked to support good causes.

Sometimes we may doubt whether our signature on its own will make any difference. But when thousands of other people do it it puts the issue at the top of everyone’s agenda - including the people in power.

However disillusioned you might feel with our political system, there’s no getting away from the fact that it’s our politicians who make the laws and if you want to change them, you have to play the game.

What the politicians think isn’t the important part. What matters is what they think we think. After all, they need us to vote them back in. They have to do their job representing our views in Parliament, or risk getting the boot at the next election. (In NSW, that’s less than 12 months away).

So please, if you haven’t already and you live in NSW, please sign the petition to the Legislative Council. NSW is the only state not to have passed a compassionate VAD law, and there can be no more delays. A similar bill lost out by one vote in 2017 and we can’t let that happen again.