'Let me choose a good death' 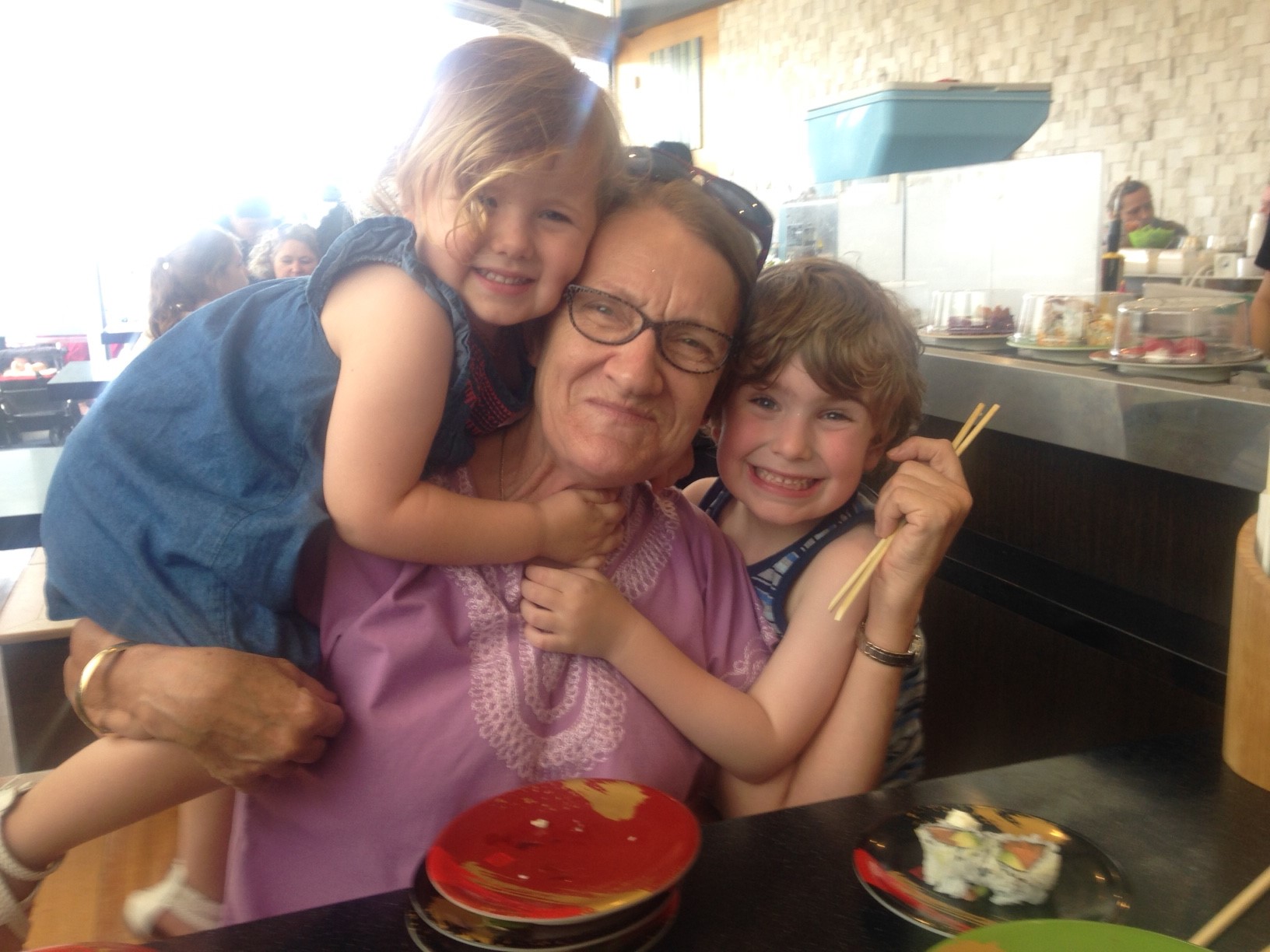 Gayl Gray was “a woman of words and lover of the arts”, instilling in her three daughters to take pride in their accomplishments “but to always make time to have a bit of silly fun”.

“A voracious reader, she had a sharp mind and even sharper wit,” Kaela Gray said of her mum, who was also a grandmother of three.

“She was vivacious and kind and curious and warm. Mum was genuinely interested in getting to know people. Fiercely loyal, she was beloved by friends and family alike.”

Gayl was a civil servant in worker's compensation for the Victorian Government before moving with her husband to Helensvale in Queensland, where the couple ran a pump business. 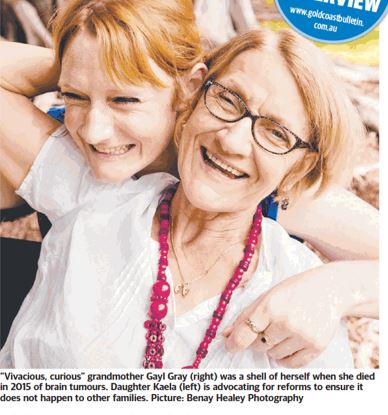 Just nine weeks later, Kaela was at her mum’s bedside in palliative care, watching helplessly as Gayl was wracked with “excruciating pain that medication couldn’t touch”.

Read Kaela and Gayl's story in the Gold Coast Bulletin

Three aggressive tumours were putting her brain under so much internal pressure it had began to herniate "literally bursting out of her skull".

Constant pain medication had effectively placed Gayl in a coma, “for to be conscious would mean unimaginable agony”, Kaela said.

“I listened to the silences between my mother’s rattled breaths,” Kaela said. “It was only the silences I found bearable.”

Gayl died in May 2015 just over two months after her diagnosis.

Waiting for life to be over

Kaela said her family had known Gayl’s was an illness from which there was no reprieve, but were caught off guard by just how quickly the cancer took hold.

Perched on the end of Gayl’s hospice bed, Kaela willed her mother to die. 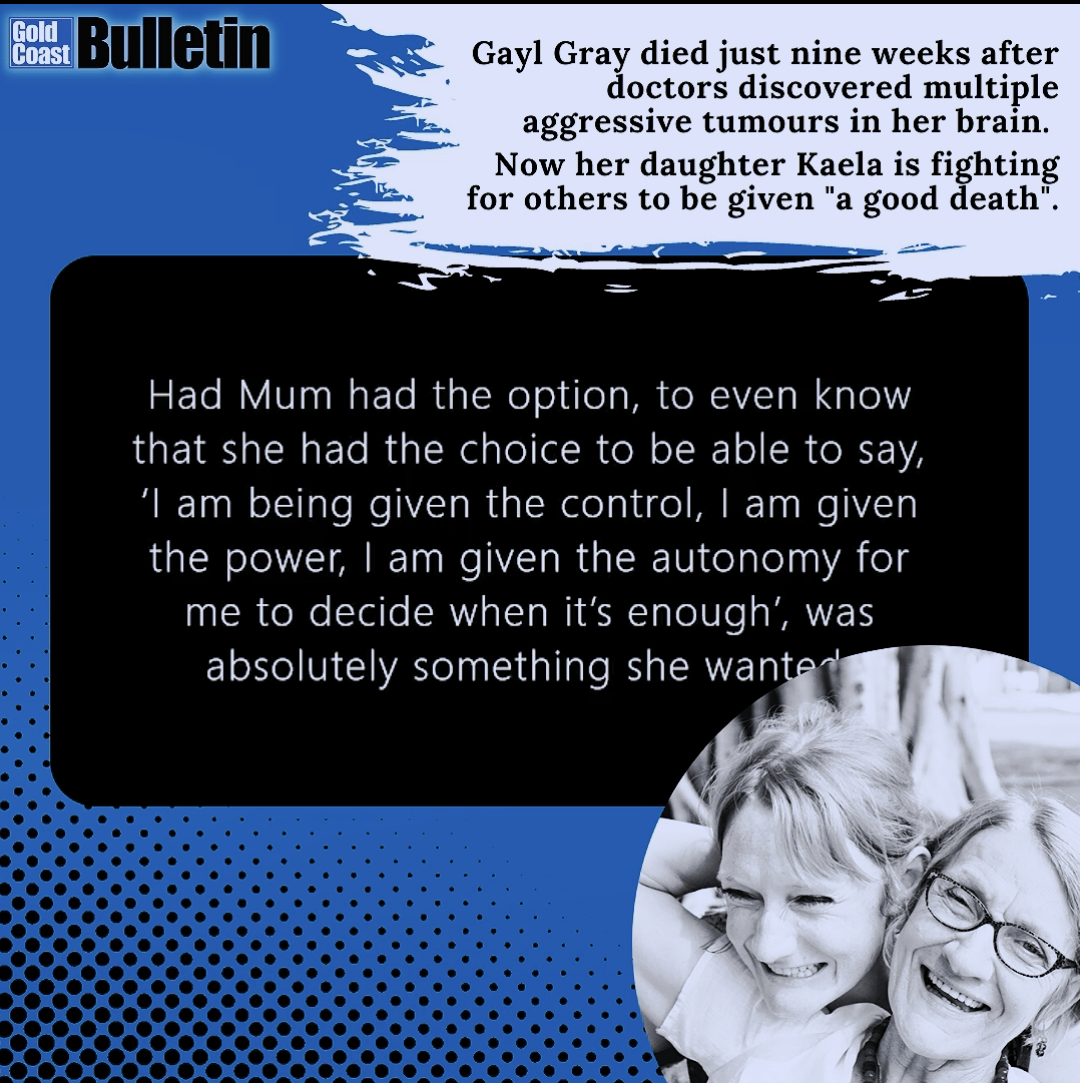 “This actually wasn’t my mother’s life anymore,” she said.

“This was the life of a cancer, living inside a gaunt shell that sort of looked like my mum.

“This was not a dignified exit and I know one thing for certain – this was not how my mother wanted to go.”

Listen to Kaela's interview with the Gold Coast Bulletin

Kaela says Australians enjoy liberties not afforded to many others, and freedom of choice is so ingrained in our daily lives that we often take it for granted.

But she is struck by the fact that how we end our lives is legally not within our own choosing.

“Neither euthanasia nor what is termed assisted 'suicide' is currently legal in Queensland,” she said.

“Your body should be no-one’s domain but your own - you decide if it is treated as a temple or a theme park.

“Frustratingly, you don’t get to decide if it will become a slave to a devastating disease.

“But I firmly believe you should be able to decide when your body has had enough. It is, after all, yours.”

By advocating for voluntary assisted dying, Kaela says she is not suggesting “that the doors to the medicine cabinet be flung open in unregulated wild abandon”.

“I am advocating for those who live in unrelenting agony. For those who know their body is no longer a safe harbour,” she said.

“I am advocating for those who wish to die with dignity and a sense of control.”

As legislators prepare to consider Queensland’s voluntary Assisted Dying bill, Kaela urges that they support the right of terminally ill people to choose a “good death”.

“We wheeled my mother into palliative care for the last small chapter of her life,” Kaela said.

“But in actuality, her life was already over. All that was left was the formality of a beating heart.

“Mum was a passionate advocate for voluntary assisted dying and, just like my mum, I am in full support of Australians being granted autonomy and dignity in the face of unending pain.

“The choice to end one’s heartbeat, with dignity and support, is the right of every anguished Australian.”