Michelle has seen a number of family members, and a former partner, end their lives, alone and desperate, because of the pain they were in from various afflictions.

Her father, Michael Flynn and stepfather, Raymond Tatt, were much loved and Michelle describes the circumstances of their deaths from brain cancer as humiliating, intolerable and unnecessary.

``I watched both of them go downhill very quickly,’’ she says. ``And I don’t think that either of them, if they’d even understood what was happening to them at the end, had they been able to make a choice, would have said they wanted to live on through their intolerable situations. I’d rather not even say what they went through, how they both lost touch with reality; to even describe some of what I saw them do… would just further rob them of their dignity.’’ 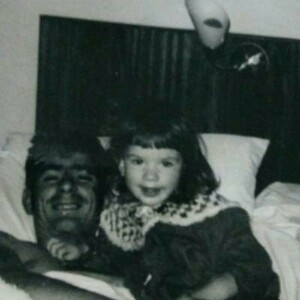 Michael Flynn, says Michelle, was fondly described at his funeral as a modern-day Robin Hood. ``Being a furniture removalist, he was best placed to do that. He’d see something nice or people would give him something and he’d give it to someone in need. I thought he was a pretty decent chap. He did trips all around the country, and when I was 15 we went on a road trip together, which was pretty cool. Most of the time he went alone. It must have been a solitary existence but he seemed to enjoy it.

``The last memory I have of him… I must have seen him a few days before he died.  It wasn’t pretty. It was quite horrible. Not able to speak. He was laid up in bed and really, really sick. I wish we’d had a conversation about his end of life… but of course the law was standing in the way of helping him. Except you’re allowed to kill yourself, as long as there is no one there to help you, or to care for you or just to keep you company to the end. Everybody should have a choice about to end your life."

Michelle’s account of Raymond Tatt’s ending, at the age of 56, mirrors that of her father. ``Raymond was my dad from the age of eight. And I watched him become as muddled and suffer the same humiliations that (Michael Flynn) suffered. And again, I wish we’d had the conversation about what he might have wanted once he was no longer himself. But I think they both would have wanted to die while they were still themselves.’’