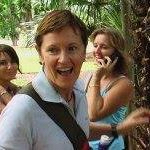 I’m patron of the Motor Neurone Disease Association of WA is that a close friend passed away from MND about eight years ago,” Jacobs says. “It was awful to watch her go through the final stages of life. She was well and truly ready to go before the time she did leave this world. We would have definitely benefitted from assisted dying.

“Robyn Hornsey was in our circle of friends. I’d known her for a number of years and she was much loved in our circle of friends. She was a very active person. She had a fairly high stress job working in disability care. She ran disability care homes for high dependency people with disabilities. MND took her two years after she was diagnosed. It was heart breaking to watch the rapid deterioration.

In the end she was pointing up to heaven and saying ‘It’s time to go, I want to go’.

“She was only in her 50s. My partner at the time was her full time carer.

“Once I became familiar with MNDA of WA’s work they asked me to become a patron. It was a no-brainer. I would do anything because the association does amazing things for people who are living with MND (a condition that affects the nerve cells, causing weakness in the muscles which eventually leads to paralysis).

“It’s a very nasty disease. There is no cure. When a person like Robyn is ready to go, they should be allowed to go and end their suffering. MND is the worst possible thing you can get. Basically your body just gives up and you suffocate to death pretty much. You just stop breathing.

It’s an awful way to go.

“While people with MND are made to be comfortable, at the end they should be allowed to leave on their own terms and when they are ready to. Some people won’t want to until they go naturally, but their brains are still functioning and they can make the decision with a sound mind right up until the end.”

as told by Narelda Jacobs, October 2018