Friends, my story will take about four minutes to read. I’m asking you to be brave enough to read about what it was like for me, personally, to be with a man I loved while he died a slow, horrific death in hospital. I ask this of you right now because, very soon, Victorian Parliament will be allowed a conscience vote on a new, humane law. If passed, this law would allow people much greater choice over the manner of their death. I hope that sharing dad’s story with you might motivate you to remind your State MP of the importance of this law. 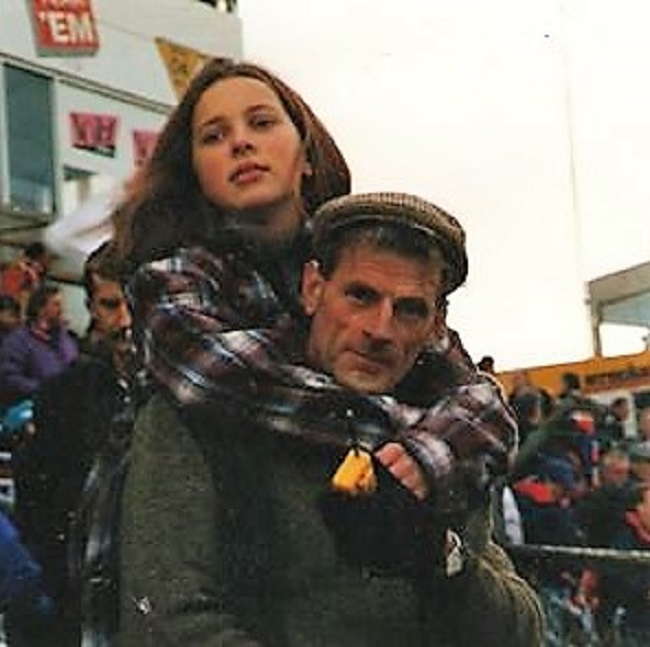 Dad was a blonde, ridiculously handsome tradesman with impressive biceps.  He had a terrific sense of humour – the dog he adopted was called Woody because it loved to chew up his firewood.  Dad and I would talk on the phone every fortnight or so… pretty much the same conversation each time, but with a lot of love.

My dad was 56 when, as a family, we watched, helplessly, his horrific experience of what is known as ‘palliative sedation’ in his last week of brain cancer.

Now, my own chronic illness means that I am shadowed by the prospect of a similar fate.

Dad had been a very fit bloke, a tree lopper by trade.  One summer day, after he fell over and hit his head in the back yard, a CAT scan revealed a large terminal brain cancer.  He jumped through all hoops to extend his life – chemo and radiation.  We supported him and cared for him as, over a period of nine months, he lost his health and began to die. He was involved with a Palliative Care service who visited him at home.

Eventually he lost the power of speech, had difficulty swallowing, he became incontinent and often confused. As a family we were struggling to keep it together emotionally.

In his confusion he continually tried to walk; he had falls. There came a point where it became impossible for us to give him care safely at home and so he was admitted to a medical ward in a major hospital.  Fortunately, my sister, who had a young baby, came in to see him, as did my brother, who was working long hours trying to start a business.

My own nursing experience told me that Dad probably had a matter of days remaining.  His agitation was worsening - he couldn’t keep still, he couldn’t speak; his eyes were wide and watery.  He kept climbing over the cot sides of the bed to try to get to the toilet, even though he had a catheter in (having a catheter in often makes you feel like you need to urinate.)

Soon he was physically unable to eat anything, and he was very thirsty. No-one put up any IV fluids.  It was understood - what was happening. Mum and I found that, for a while, we were able to feed him tablespoons of lemonade and it was heartbreaking to watch him sipping at it as though it might save his life, but of course, my strongman of a dad was as dehydrated as hell. A nurse would come in with sachets of mouth cleaner and big swabs, and, while they tried to explain to dad what they were doing, the nurse would hold him by the jaw while he tried to resist, and swab out his mouth while he writhed.

It took a few days for him to die by ‘palliative sedation’. I had never nursed anyone through this – palliative care was outside my area of experience. Dad’s sedation was done via subcutaneous injections.

When Dad became so agitated that not even one-to-one nursing could keep him and keep him from physically struggling, he was sedated to the point of a fitful unconsciousness.  His sleep was restless, full of jerking limbs and garbled sounds.  Every couple of hours he would start to moan loudly and try to pull on his catheter.  Sometimes he would surface to wide-eyed consciousness, thirsty, crusty at the corners of his mouth, staring at me with what I knew was terror; he’d grip my hand so hard it hurt.  I’d press the buzzer and there would be more mouth care with swabs, and then another shot would put him out. It was mainly mum and who took it in turns, holding and rocking him as he sunk back in to semiconsciousness or sleep punctuated by groans and twitching.  I didn’t know whether he could hear us talking to him. This went on for about three days.  During this time the rattling chest of pneumonia kicked in.  Pneumonia is sometimes called the ‘old man’s friend’.  My dad was 56.

The night before he died, I was with him in the evening.  The increasing mucous in his chest was causing regular coughing and choking fits which meant that that nurses would hold him down and hold his face still so that one of them could suction out his throat and upper airway of mucous - very distressing, very loud suctioning.

When I’d taken over from mum that afternoon, she was looking haggard, her red and glassy eyes gave away that she was crying a lot.  I decided that I’d stay with him overnight.  By late in the evening, I felt was coping in a in a kind of ghostly dissociative way.  I myself was acutely unwell (I have a chronic severe autoimmune disease), I was physically and emotionally exhausted, but so was mum.  I made an educated guess that dad had perhaps another 24hrs in him – I thought I’d let mum go home for proper sleep. Then, I thought we might both be there for staff handover and I planned to discuss with the staff an increase to his meds.

There was just enough room for me and dad to lay together on the bed and spoon for short periods but he was jerking and kicking a lot.  I rocked him, softly sang our childhood songs, like ‘You Are My Sunshine’ and ‘Morningtown Ride’.  I whispered “It’s me dad, I’m here, I love you, dad” and “you can let go now, dad” and I cried silently and pressed the buzzer every 2 hours, sometimes every hour.  I noticed his breathing become shallower, spongier, with the occasional big gasp for air which would become a choking fit.

In the early hours of the morning, I was in physical agony and had blurred vision.  I called mum – she was there within half an hour. I am so glad I had phoned her.   It was she who held his hand and talked to him while he finally slipped in to a deep, but noisy unconsciousness and then finally stopped breathing.

None of us should have had to go through that.  As a family, it’s an understatement to say we were traumatised.  I feel a lot of pain and regret that I didn’t explain to dad what to expect when he died.  He had been so frightened of the dying process. While he still had the power of clear thought and speech, he didn’t initiate any talking about it, and to my great regret, neither did I.  I also carry some guilt because I didn’t push the doctors to increase his dosage sooner – but I know I was in a state of trauma and not thinking clearly.

My own condition (scleroderma) is unpredictable.  Organ complications could have me being a terminal patient at any time in the future. It could be soon, it could be later. It’s more likely that I’ll have a slow death, not a quick one.  I’m terrified of going through dad’s experience, and I don’t want my family to have to go through it either.  I don’t intend to let it happen.

Sitting down to write this has been enormously challenging to my mind and heart. It has been like re-living the experience, but I needed to do it now.  For myself, for my dad and for the overwhelming majority (more than 75%) of Victorians who support assisted dying.

Very soon, a bill of law will be put to a conscience vote by Victorian Parliamentarians.  If successful, the passing of this new, humane law will offer Victorians who are suffering untreatably at the end of life a legal option to end their suffering peacefully, with the help of their doctors, if or when they are ready.  I wish my dad had access that choice.  I want to have that choice if I become terminally ill.  I want all Victorians to have that choice.