The Rally For Choice on the steps of Parliament House was an amazing success. A huge thank you to the hundreds of people who turned out in the cold and (sometimes) rain to show support for the Voluntary Assisted Dying Bill 2019. 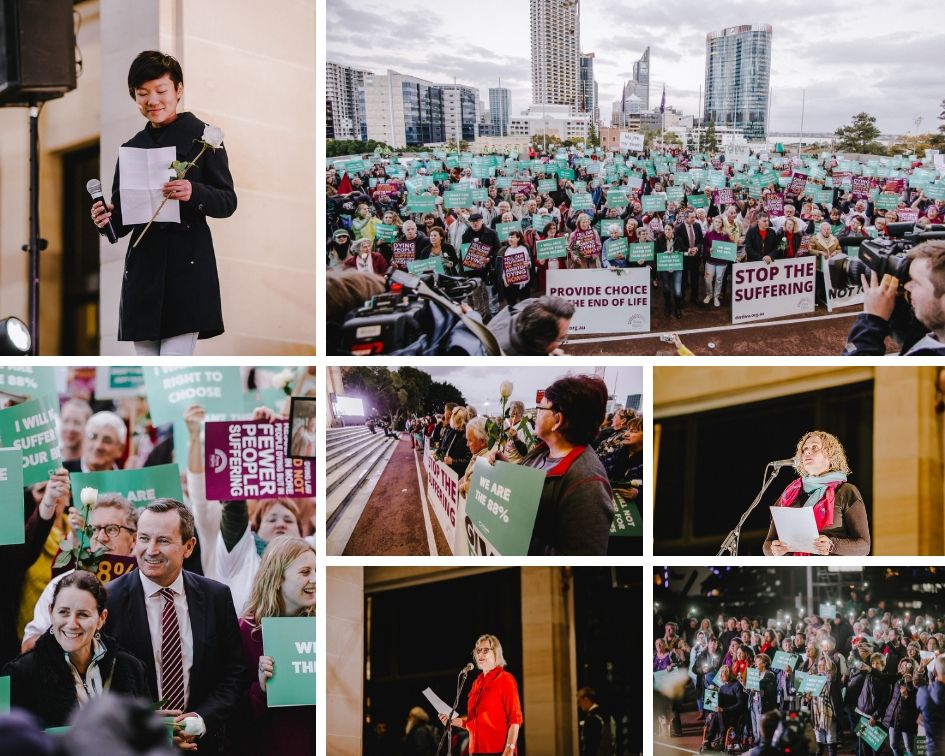 The atmosphere was incredible and the speakers, including Belinda Teh, Deborah Allcott and Lizz Clarke, delivered a clear and unambiguous message that there is broad public support for a law allowing terminally ill Western Australians to avoid unnecessary suffering.

Belinda Teh told the rally she had been warned not to get her hopes up.

"I hope for a future where we can one day look back and say to each other: 'How did it take us so long?'

"I hope for a future where we are no longer scared to look our colleagues, our friends and our families in the eye and say those words that are still sometimes so hard to say: 'I support voluntary assisted dying'.

"I hope for a future where a dying person who is suffering and in agony will be able to ask: 'Can you help me', without shame, without fear, and without judgment."

As the rally was underway outside, inside parliament the Voluntary Assisted Dying Bill passed its first hurdle, with the lower house (Legislative Assembly) voting 44 to 12 in favour of sending the Bill into consideration in detail.

Commending the Bill to the House, Deputy Premier Roger Cook said: "This is a watershed moment for our chamber ... For those who say we haven't done enough I say to them, if not us, then who? If not now, when?"

It is during this part of the process that MPs ask detailed questions about each clause of the Bill and potential amendments are moved.

So far, less than half of the 190 clauses in the Bill have been considered. Unfortunately, some anti-VAD MPs have already begun diving into the fear, uncertainty and doubt which characterises the ‘no’ campaign.

The debate in the lower house is expected to continue until the end of the month, when a final vote will see the Bill move to the Upper House (Legislative Council).

You can watch the parliamentary debate live here.

This week we were also buoyed by news that the WA Primary Health Alliance (which includes the WA Pharmacy Guild, Royal College of General Practitioners and the WA Association for Mental Health) has come out in support of the Voluntary Assisted Dying Bill.

It sends a clear message to our politicians about the fact, not fiction, of this Bill and encourages their support, particularly in the Upper House.

What you can do now

If you haven't already, please sign the petition. This will be tabled in the Upper House where it will have the most impact.

Continue to contact your MPs, particularly your Upper House MPs, with your reasons for supporting the VAD Bill. You have six Upper House members of parliament and they need to hear from you, their constituents.