I have no option but to travel

It's six years since I was diagnosed with lung cancer and still hard to believe how this could have happened to me, a very healthy, 60-year-old non-smoker. 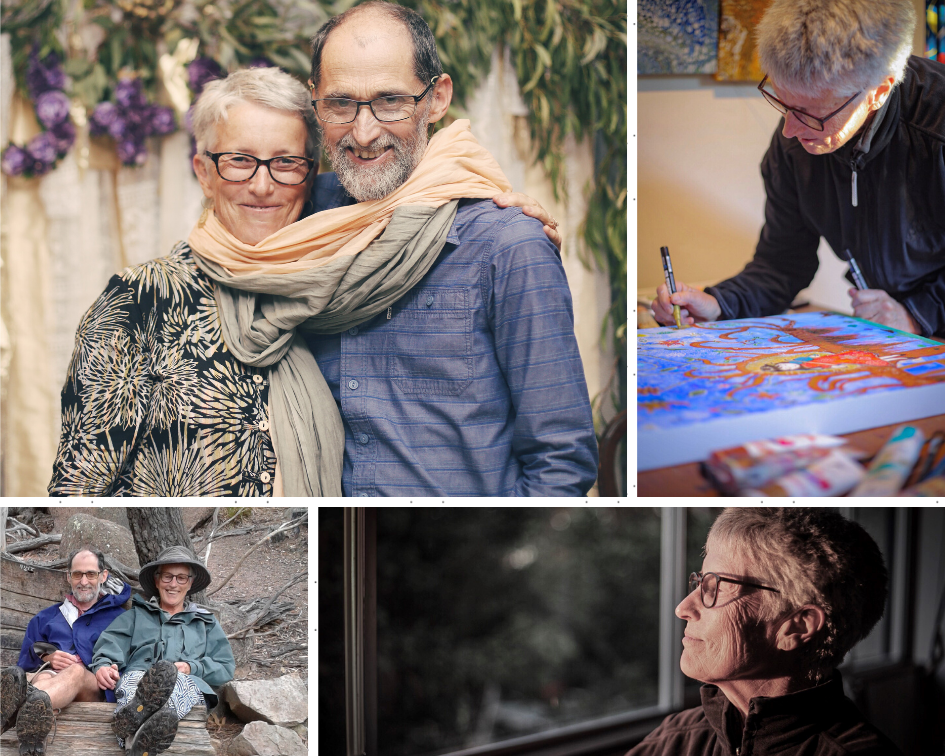 Now looking through the narrowing window of treatment options left, I know I don’t want to die as just another victim of this disease.

I don’t want people to say that I 'lost my battle' with cancer. I want an empowered, meaningful death and to ‘live my death’ as I live my life, with purpose and conviction.

Being able to access an assisted death has been one of the greatest comforts on this difficult journey, enabling me to stop worrying so much about the end of my life and to get on with living the rest of it well and with purpose.

I don’t want to die as just another victim of this disease.

Wanting a better end of life option than available in NSW, in 2013 I joined Swiss organisation Dignitas. In 2015, with a terminal diagnosis confirmed, I joined Life Circle in Basel, moved by GP Dr Erika Preisig’s outstanding compassion displayed in a documentary about UK resident Simon Binner’s end of life experience.

In 2018 when it seemed I couldn’t access the next life extending treatment, I applied for Life Circle’s ‘green light’, the pre-approval stage for a voluntary assisted death. Although I managed to access the next treatment, every scan brings me closer to the time when this too will stop working.

When I decide the time is right, I will nominate a date to end my life and make the arduous and expensive journey to Switzerland with my partner, family and friends.

Not an avid overseas traveller, I would prefer to die on home soil, but as this isn’t available in NSW and I’m not in a position to move to Victoria, I have no option but to travel, knowing how fortunate I am to have this option which should be available to everyone who needs it… not just those who can afford it and are physically able to travel there.

The call for change on this issue is gathering momentum around the world and I hope my experience can add to the community voices for change to allow terminally ill people to choose a voluntary assisted death as an integrated part of the existing suite of options available for easing pain and suffering.

Janet is pictured with her partner Glenn Brewer.

Read more of Janet's story in the Port Macquarie News

And in the Sun Herald.

In September 2019, Janet wrote and illustrated an art journal about her experiences. Her work was subsequently exhibited in Port Macquarie.

Milestone birthdays can be difficult. In 2013 my 60th birthday burst into my life like a gale force storm, its wild wind tearing at my roots and hurling me into an unfamiliar landscape. My birthday came soon after the discovery of lung cancer, then the removal of the lower lobe of my right lung and a 20mm tumour. How could this happen to me, a healthy non-smoker? I’d never even heard of a lobectomy nor the medical terms for the maelstrom invading my body. 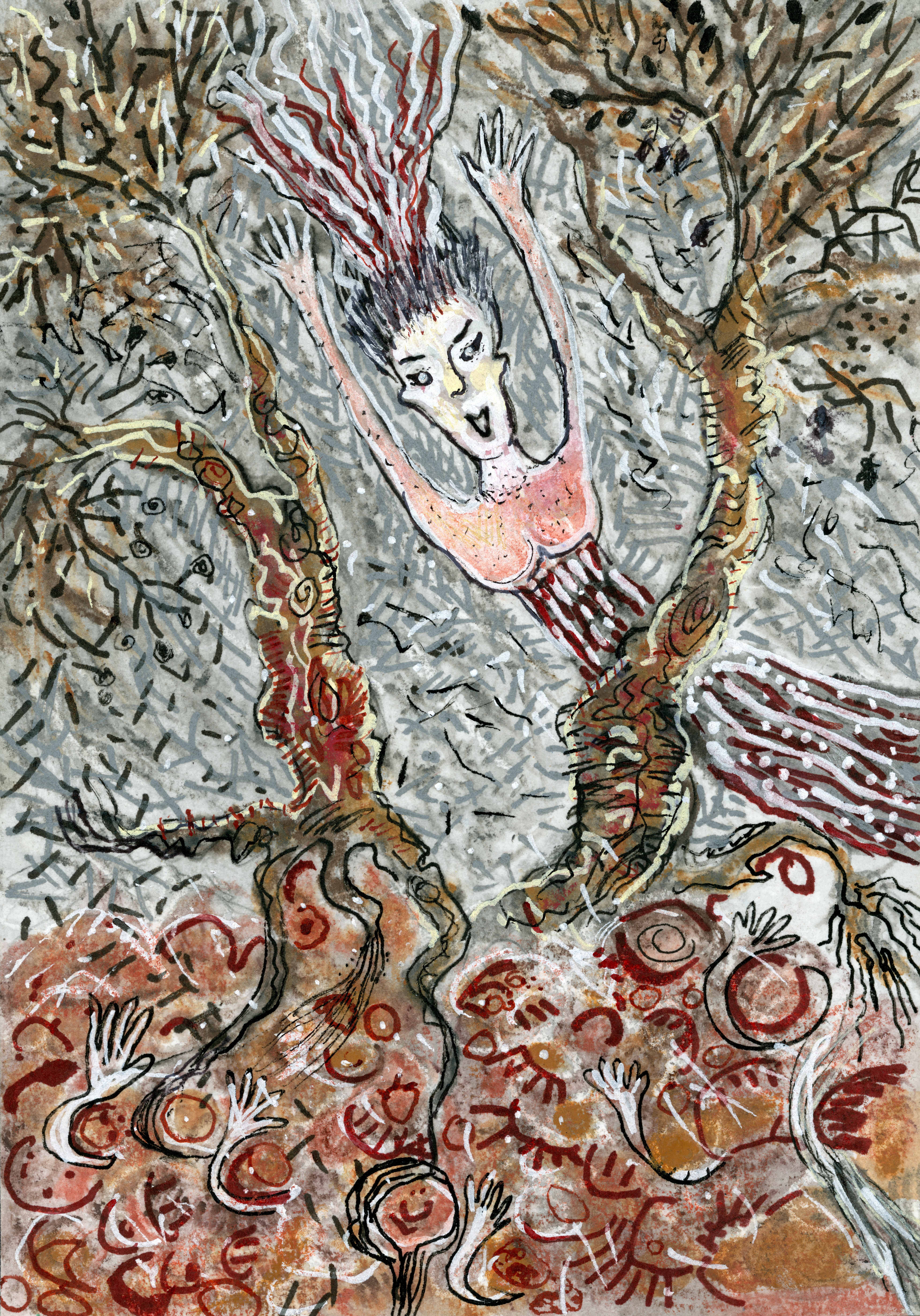 My birthday present was being, I naively thought, on the road to a full recovery. The oncologist warned me of the true nature of this mini-beast, but I was too scared to see. I needed to hope, to believe I could heal.

Dramatically severed from life before cancer, I was like a sailor who’d survived the storm, but was now cast adrift on a vast ocean clinging to a flimsy life raft of nature, creativity and meditation to help me face the forecast of an untimely death.

Nurturing my will towards life and embracing the unpredictable sea, I combed through the wreckage, discovering amongst the debris some precious shards of acceptance, remnants of equanimity and tiny fragments of grace.

My survival instinct told me I’d need a sturdy life raft on this voyage, one strengthened by my will to die a spirited, creative and purposeful death. My story when woven with many others could strengthen the fabric of the movement for change to a more dignified, compassionate and sensible approach to death for suffering seafarers.

Advice from a friend 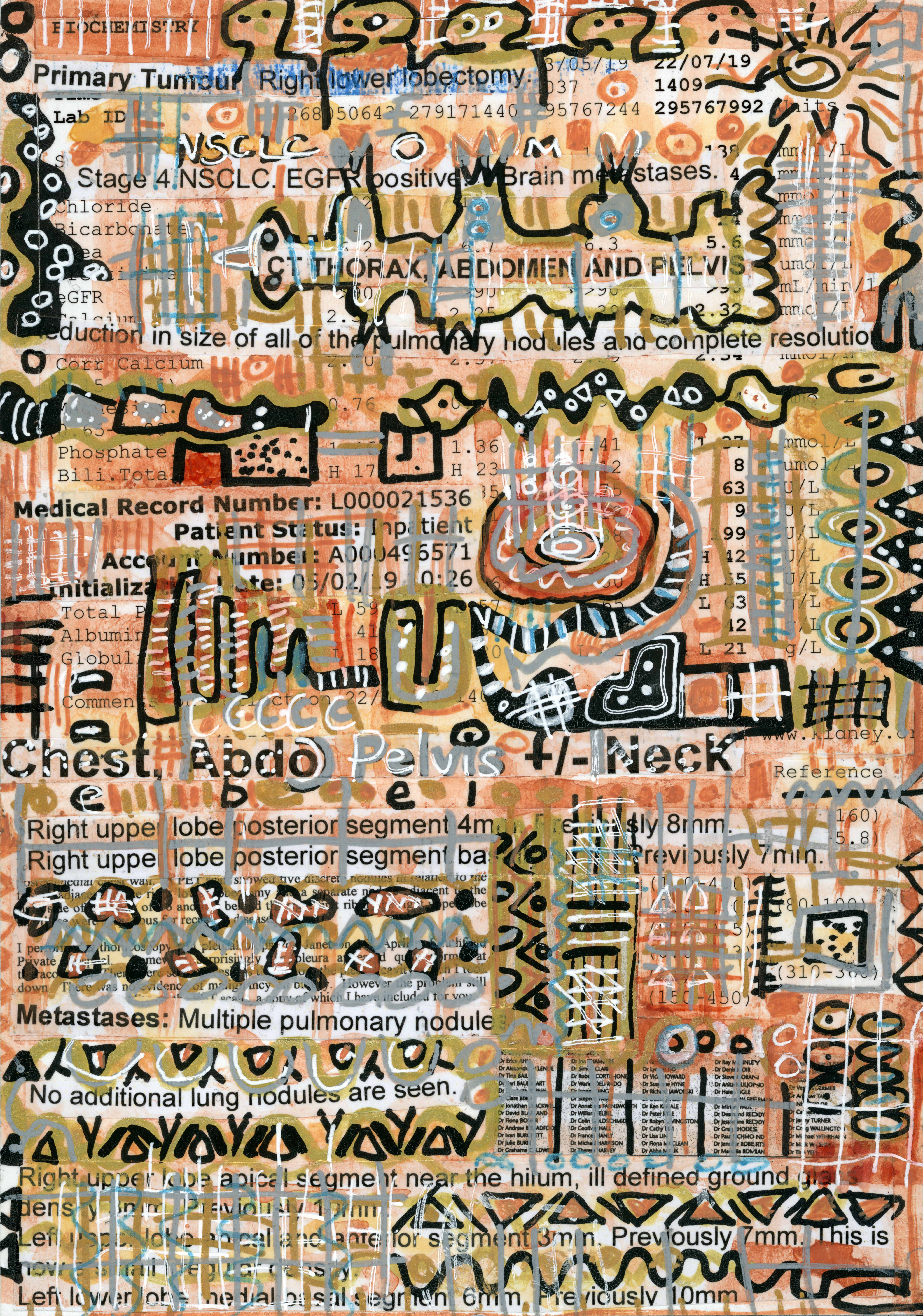 Put yourself at the centre, grow from the inside, out. Shed the old bark and revel in the bare, new limbs. Be honest and fearless, express your deepest thoughts and feelings. Live with conviction. Your creative life force illuminates all the dark places you fear. Let it take the lead, even if it seems to go where you don’t want to. Don’t overwork it. Creativity has its own life, revealing  its gifts just when you’re almost ready to give up. Abandon expectation.

Be present. Give yourself the gifts of space and take time to explore. Don’t rush headlong into the world of ‘doing’ without so much as a backward glance at where you are now. Be fearless and free…happy. Follow your instincts, go out on a limb, enjoy the view.

Sailing into the fog 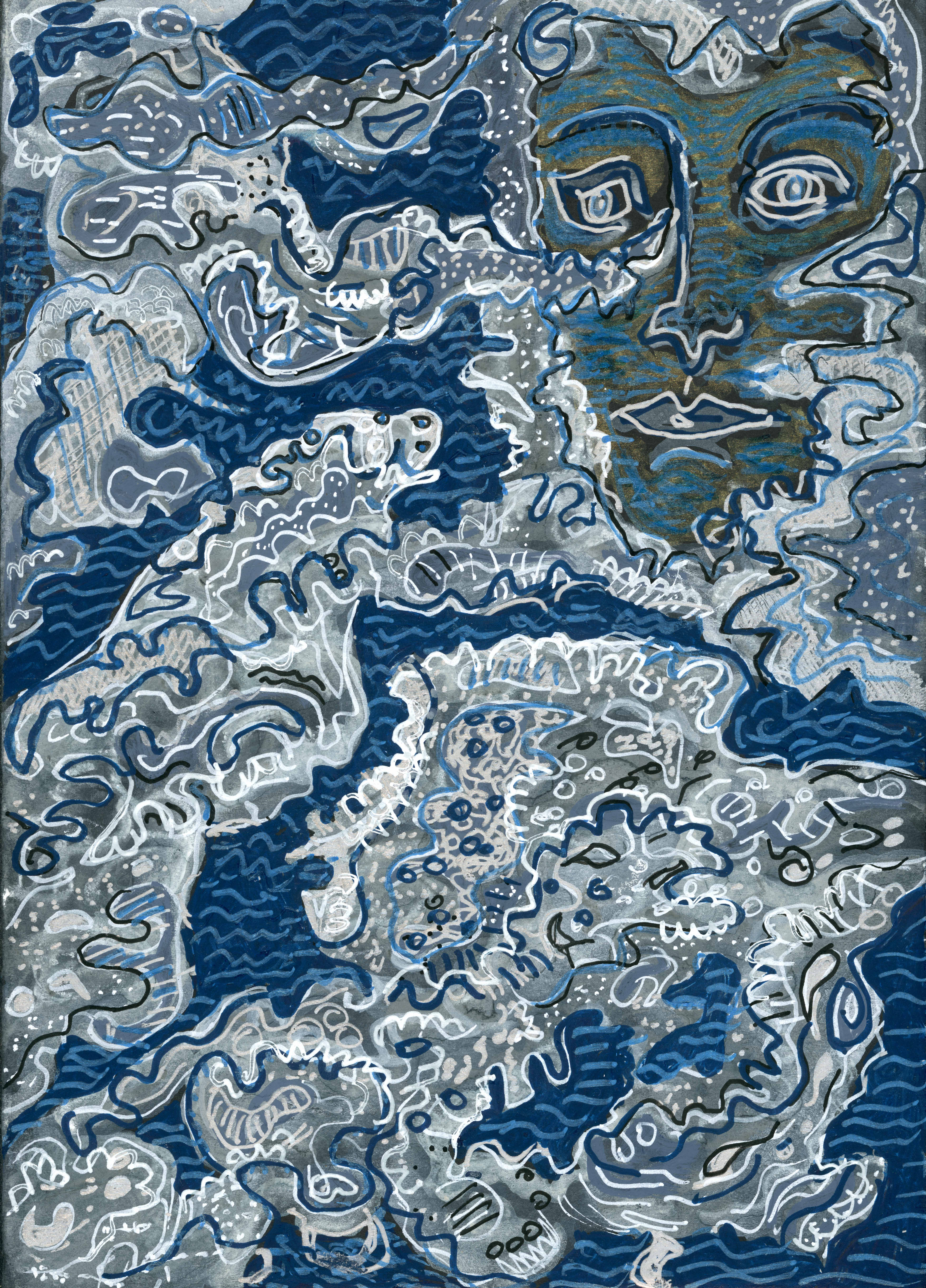 In 2015 the cancer, previously fairly well-behaved, was on the move. The official diagnosis was now terminal. Feeling like I was drowning, I grabbed at the lifeline of a new targeted drug therapy which hauled me back into life.

In 2018 the clever cancer cells mutated and performed that most dreaded of manouvres, metastasising into my brain. By holding my breath underwater in the churning sea, I survived the next squall of brain surgery and genetic testing until unbelievably a second life line was thrown, another new life extending drug therapy.

Now in late 2019 its challenging to keep sailing into ever thickening fog, with some charts missing and far from sight of terra firma. On a fine day with the wind in my sails life’s good, but cancer’s storm clouds can blot out even clear skies and cast threatening shadows across the future. I try to carefully navigate a course through the maze of jagged reefs ahead.

What will the next scan reveal? Will I be still… at anchor in this bay or thrown into the next violent storm? Steady ahead or a rapid change of course? When will it be time for me to abandon ship? 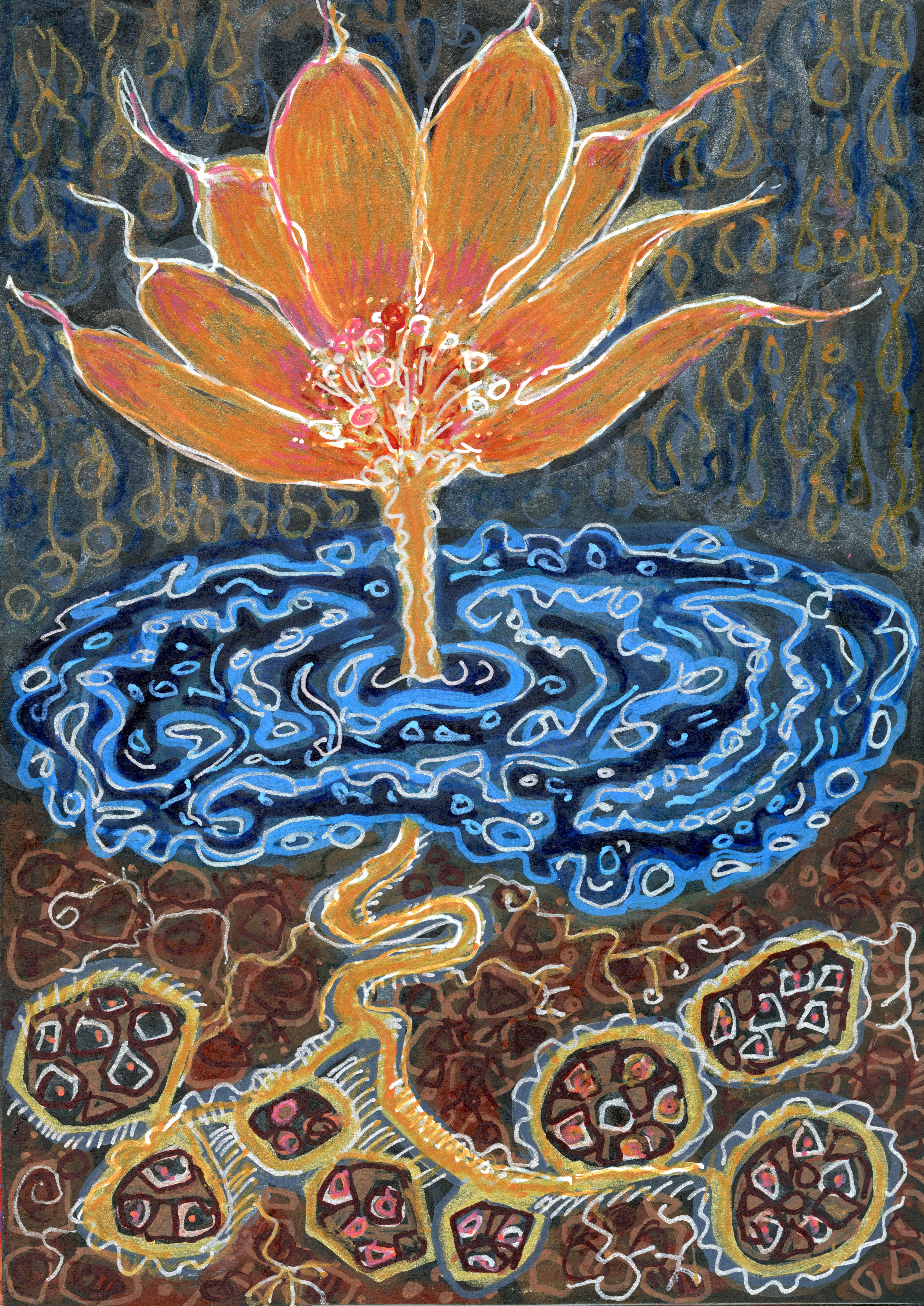 In our death-denying culture it’s hard for people to accept the simple fact that I‘m terminally ill. Faced with my early demise, some look for the reassurance of a reason. I used to believe that ‘everything happens for a reason’. Now I find the thought offensive.

No one knows why I have lung cancer. Sometimes clouds appear on the horizon, big waves rise up from even the calmest seas. Regardless of my hopes for smoother sailing and beyond any skillful moves I make to prevent capsize, I know that at some time the confluence of multiple forces with time passed, will result in the perfect storm when the crest of this massive wave reaches its peak and spills, taking everything in its path.

At the beginning of this dangerous voyage I learned of a sheltered bay with deep anchorage where I could end my journey if the waters became too rough to safely sail. My plotted course will take me outside my comfort zone to Switzerland to access a voluntary assisted death.

Knowing that somewhere in the navigable world, there is safe harbour and a skilled pilot to guide me, helps me ride out the waves of fear and sadness that can threaten to engulf my little boat. This will be a confronting journey but I’m encouraged by other sailors who’ve navigated these seas before and I have a strong crew to accompany me.

Perhaps my experience can be a beacon to other sailors in the hope that one day, safe harbour for troubled seafarers will be found Australia wide.